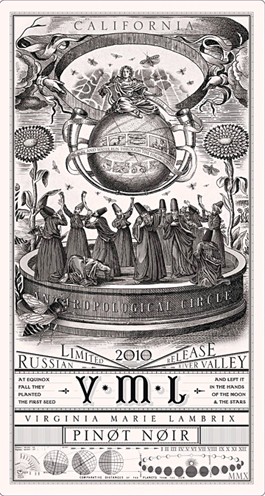 It’s high noon on Monday, the extra inning of the wine country weekend, but the hour has seen only a few people trickle in, all on business with the winery. Could be on account of the temporary banner, surmises my host, or the unfamiliar name, albeit hoisted across the entrance to a facility that is eminently familiar to locals and returning wine tourists. Known as C. Donatiello for a few years, and Belvedere for a greater stretch before that, VML is backed by a familiar crew, notably Bill Hambrecht, with Mark DeMeulenaere and Truett Hurst partners Phil Hurst and Paul and Heath Dolan. Out of the shade of the vineyard and into the fore, for the first time, is namesake winemaker, Virginia Marie Lambrix.

“It’s been like a rollercoaster and a whirlwind all at once,” says “Ginnie” Lambrix of the fast-paced creation of this brand, which has expanded from a few cases under her own label to having a one-time 100,000-case facility at her disposal. “But if you had told me that this was the end result . . .” she marvels, passing by a battery of pumps and a fleet of forklifts—well, she would hardly have believed it.

Tasked in past and present endeavors with Biodynamic winegrowing, the young winemaker came to the practice after an early career in science. While VML wines are not labeled as such, many are sourced from vineyards that practice organic and biodynamic-style viticulture. When the artist who created VML’s new labels learned this, he said, “‘Ah, so you’re a witch!'” laughs Lambrix. The latest releases sport a rather wild design that’s a mashup of an Albrecht Durer engraving and a sort of 19th-century steampunk seed packet.

Competitively priced for the region, the 2010 Russian River Valley VML Chardonnay ($25), made from old Wente clone grapes, has the faintest aroma of toasty oak over butterscotch and Meyer lemon, with a soft, sweet sensation of caramel that lolls around the palate for days, courtesy of a nice balance of acidity. Lambrix enjoined me from reviewing the just-bottled 2010 VML Pinot Noir ($30)—”It’s just a baby”—but it’s floral, bright and promising. From the western frontier of the appellation, the 2009 Ivywood Vineyard ($45) has foresty, redwood aromas and lush, meaty black cherry and plum-skin fruit; the 2009 Boudreaux Vineyard ($45) is more aromatic of cool cherry and raspberry, with a firm, dark fruit finish that sticks to the palate.

Such wines can be enjoyed daily—and, for now, without crowds—at the tasting room and during a continuing tradition of concert weekends.