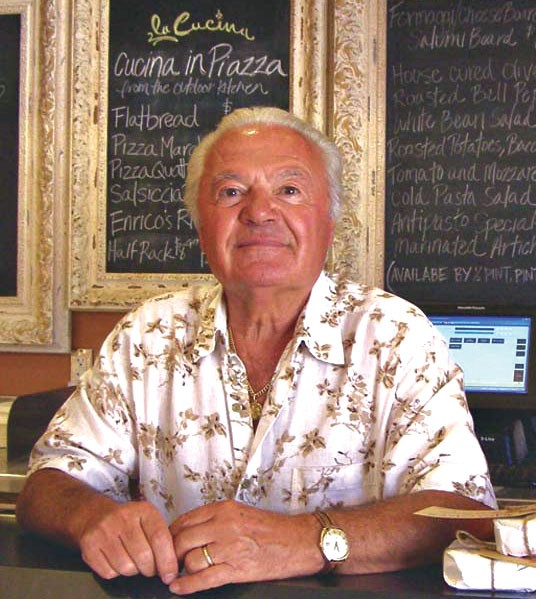 If this looks like just the latest faux Italian villa to pop up in wine country, step inside and take a closer look. A gelato shop, pizza oven and soon-to-be pasta company fill the nooks of the stonework courtyard, where the first person I meet is an authentic Italian craftsman, putting the finishing touches on the doors and windows, all imported from Italy. If Il postino rode his bicycle straight through the courtyard, I wouldn’t be the least bit surprised.

“We hope that you’ve walked into a place that you consider a little village,” says proprietor Henry Belmonte, “reminiscent of some travels that you may have had.” Henry’s parents emigrated from Italy in the 1960s, landing in Boston. After moving to Kenwood, the elder Belmonte, a carpenter, became disenchanted with the lack of craftsmanship during the 1970s housing boom, so they opened a deli (now Cafe Citti). In the 1980s, sons Henry and Victor helped to run the white-tablecloth Caffè Portofino in Santa Rosa. In 1999, they got the idea to make a bit of wine for their patrons, but the following year Victor passed away unexpectedly. VJB is named in his memory.

“I don’t have any desire to be back in the restaurant business,” Belmonte says while striding through the little piazza, breaking away to chat up a trio of women sitting at a table and make them feel welcome with a pour of Prosecco. The deli is overflowing with local and imported cheeses, ready-made panini and grab-and-go salads. “But the beautiful thing is,” Belmonte says, his vowels still bowed with a Boston-Italian note, “if you say, gosh, Henry, I love what you’ve got, but I’m staring at that hot coppa over there, would you mind slicing me off half a dozen slices . . . or would you mind getting me another roll and making me a sandwich? No problem.”

The whole point is to entice visitors into the comfortable tasting room, of course, where Italian varietal wines like Aglianico, Nero d’Avola and the 2010 Mendocino County Barbera ($30), with fresh, earthy aromas and chewy black cherry fruit, may be tasted, along with Chardonnay and nicely finessed Cab blends like the 2008 Dante ($36).

If wine isn’t your thing, particularly on your morning commute down Sonoma Highway, stop by anyway. Vittorio (pictured), our Italian craftsman from the beginning of this story, mans the espresso bar from six in the morning weekdays, seven on weekends. “And he’d he happy to make you what he considers the best coffee,” says his son Henry.