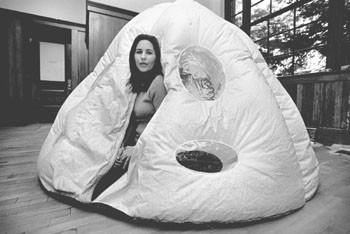 The devastating 1995 earthquake in Kobe, Japan, left thousands of victims homeless, forcing them to band together in loose communities on the scorched remains of what was once their city. When government aid proved slow to arrive, the renowned architect and artist Shigero Ban–in Kobe to assist with the rebuilding of a local church–began to question the existing definitions of home and community.

As a temporary answer to the massive homelessness he witnessed, Ban designed and built what he called the Paper Log House, a portable home for one or two people constructed of cardboard tubes and beer cases and tenting material. The artist ultimately manufactured and distributed hundreds of these paper log houses, many of which were joined together to form instant disposable neighborhoods–part housing solution, part social protest.

One of Ban’s ingenious houses will be on display at the Sonoma County Museum, which is launching a sensation-stirring new exhibit titled “Utopia Now! (and Then).” The remarkable exhibit, which opens with a reception on Feb. 14, brings together the work of 11 socially active artists from around the world. Each addresses in different ways the growing need for creative urban transformations.

Along with Ban’s Paper Log House, visitors to the exhibit will encounter a model of Nils Norman’s proposed Protest Park, a series of tree-house-like structures rigged with a PA system for use in political demonstrations. They’ll also find architectural sketches for a proposed Netherlands city that would float in the air (riding on methane gas released by a vast garbage dump). Other utopian eye-poppers include a house built into scaffolding, Amy Franceschini’s Destiny Module (think of a house that fits in a backpack), and an inflatable hose structure dubbed the ParaSITE.

The ParaSITE is designed by New York artist Michael Rakowitz to conform to New York’s antihomeless laws, which prohibit tents more than three and a half feet tall. It’s made of plastic trash bags, Ziploc bags, and packing tape, and is engineered to attach to the warm-air outtake ducts on the exterior of large buildings. Like Ban’s paper houses, the ParaSITE is meant as a conspicuous social protest.

And, yes, visitors are welcome to slip inside the ParaSITE for a test nap–if they dare. “It’s OK with us,” insists Marina McDougall, the exhibit’s curator. “We know that some people will be tempted to go inside. But they should be warned. It’s been, shall I say, used. It’s kind of funky in there.”

McDougall is an independent curator who has organized exhibitions at the MIT Media Lab, San Francisco’s Exploratorium, and Los Angeles’ bizarre Museum of Jurassic Technology, among other institutions across the country. An expert on the intersections of art, science, technology, and culture, McDougall is also a co-editor of the book Science Is Fiction: The Films of Jean Painlevé. The Utopia Now! portion of the exhibit is an import from Oakland’s California College of Arts and Crafts, where McDougall presented the show in September.

In Santa Rosa, “Utopia Now!” will be linked with utopias of yesterday. On display will be a collection of artifacts, paintings, and photos from five of Sonoma County’s famed–and failed–utopian communities: Altruria, Fountain Grove, Icaria-Speranza, the Morning Star Ranch, and Wheeler’s Ranch.

“What’s most exciting for me about the Sonoma County show,” McDougall says, “is that I’ve been able to research the history of these amazing attempts at practical utopias. It turns out that there are some really interesting ways in which the contemporary work–the Utopia Now! part–intersects with the historical work.”

As an example, McDougall cites Scottish artist Chad McCail’s painting Living Things Grow, Regenerate, and Die, which depicts a bucolic scene involving the sexual discovery of a young male and female. “Then there’s a painting from the days of Wheeler’s Ranch,” says McDougall, referring to the fabled Sonoma County commune established by the Diggers in the 1960s. “Coincidentally, it shows the same exact scene. Each painting is full of hope for the future, full of belief in the power of human beings to engineer a perfect society, and also full of a kind of bittersweet longing.”

If you think this exhibit sounds like nothing you’ve seen at the Sonoma County Museum before, you’re right. “Utopia Now! (and Then)” is the first new show since the arrival of the SCM’s new executive director, Natasha Boas, whose vision for the museum is decidedly grand, even a bit radical, given the august institution’s reputation–deserved or not–for caution, conservatism, and even blandness.

“We’re going to be a much jazzier museum than we’ve been in the past,” Boas says. “We’ll be employing an updated exhibition design for all our shows. We’re shaking things up a bit. More than a bit, really.

“Basically,” she adds with a laugh, “we want all the young, cool people to start coming to the museum, along with those who’ve always enjoyed coming here.”

Boas comes aboard in the midst of the museum’s ambitious ongoing expansion effort, which has been marked by setbacks, controversy, and revision. The first component of that plan calls for a major expansion of the existing building, which will add another 11,000 square feet of exhibition space at a cost of $25 million. If fundraising goes well, Boas says, groundbreaking will take place in three years.

Until then, the new director will be working to implement her bold new curatorial purpose, which Boas sums up in the phrase “where land meets art.” In fact, those four short words have already become a certified mantra around the place.

Says McDougall, who will continue to curate occasional exhibits at the museum in the future, “Beginning now, the Sonoma County Museum will become a major Northern California cultural experience. And if that’s not a utopian statement, I don’t know what is.”

“I see this museum itself as a kind of utopia,” she says. “Our vision for this place is very much a utopian one. I’ve always believed that museums should be utopias–places where people can have an aesthetic, social, and intellectual experience. A utopia is a nexus for new ideas. That describes Sonoma County, and with what we’ve got planned for the future, it will also describe us.”