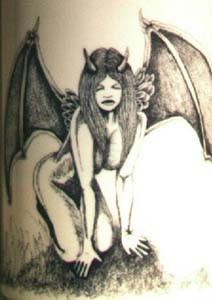 What’s not so typical is the artist.

“Greetings with a smile,” states the cheery blurb on the artist’s Web page. “I was just wondering that after going through my trial and all the media statements about myself: Could there be someone out there in the world who would be with an open mind to not take everything that has been said about me? Could there be anyone who could take the time to see for themselves, just who I really am.”

The murder occurred in 1993, but memories of the case are still vivid. Davis, a state parolee with a long criminal history, invaded Klaas’ quiet neighborhood home during a slumber party. While Klaas’ mother and sister slept nearby, Davis bound and gagged her two school friends and abducted the sobbing 12-year-old at knifepoint.

Two months later, Davis confessed to strangling Klaas and led police to her body buried beneath a scrap heap in Cloverdale. In 1996, he was convicted and sentenced to die. So how is he now able to reach out to the world via the Internet, display his art, and even request pen pals on his own home page? Could the site be a hoax?

“Richard Allen Davis’ page is indeed genuine and is still active,” say Tracy Lamourie and Dave Parkinson, directors of the Toronto-based nonprofit Canadian Coalition Against the Death Penalty, which provides and maintains free Web pages for death-row inmates. “The page was created in April of 1999 when we received a letter from Richard Davis, as we do from many death-row prisoners, in response to this outreach form that is passed from prisoner to prisoner,” they add.

Critics charge that featuring Richard Allen Davis, the high-profile convicted killer of “America’s Child,” is an odd choice for a poster boy for such an organization, which claims to champion human rights. Not so, respond the CCAPD co-founders.

“We offer free Web pages to all death-row prisoners, regardless of whether the perpetrator is high-profile or not, guilty or innocent. We ask one question: Is the person under sentence of death?

“We believe that the government should not be given the power to kill its citizens in the guise of justice. Period,” note Lamourie and Parkinson in a joint statement.

“We don’t feel any one murder is better or worse than any other, or that the life of any victim is more or less valuable than the life of another murder victim,” they add. “Therefore we don’t make any judgments as to which crimes would disqualify the offender from appearing on our pages. If they are sentenced to die, then they are welcome to use our pages to attempt to garner support to attempt to save their lives.”

However, Lamourie and Parkinson admit they’ve received ” a lot of negative response” from individuals outraged by Davis’ page.

One of those outraged Web surfers is Marc Klaas, a full-time campaigner in the cause of preventing violence against children since the kidnapping and murder of his daughter.

“We did receive an e-mail from Mark [sic] Klaas, who was not pleased with Davis having a page. . . . I believe he had been alerted to the existence of the page in December when he was contacted by a local California TV station,” says Parkinson.

He did not elaborate on the communication.

The Davis websites, located at http://members.xoom.com/_XOOM/ccadp/davisart.htm and http://members.home.net/ccadp/richarddavis.htm, are still up and running, complete with recent photographs and a request by Davis to “place me on other countries (sic) death row penpal web hook ups.”

As for Davis’ artwork, it’s for display purposes only, according to the CCAPD. “As far as I know, [the work] was never for sale,” says Parkinson. “At least not on our site . . .”