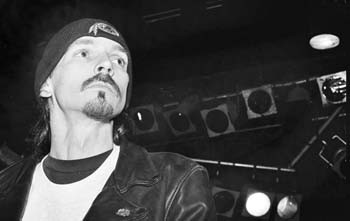 A DECADE AGO, aspiring punks and headbangers dreamed of playing their first gig at the rocking Railroad Square nightclub Magnolia’s. Now that former hot spot is a kitchenware store. In the downtown Santa Rosa area, many other local music clubs–the Studio Kafe, Cafe This, Santa Rosa Brewing Co., Masses, and the Moonlight–have also gone silent.

The Old Vic on Fourth Street seems like the only one that can last.

These ups and downs of the music scene come as no surprise to Patrick Warner. The 31-year-old music promoter and sound engineer knows that sustaining local music is hard work.

For four years now, his company, Aurora Sound Presents, has provided the North Bay scene with such “musician and event services” as booking, promotions, and equipment rentals. In that time, Warner has seen a lot of venues come and go–especially go.

But now Warner thinks he has a simple solution to the problem of the disappearing nightclubs. The answer: Don’t open a music venue as a nightclub. With that philosophy in mind, he is crafting an ambitious plan to open a building or large room as an all-ages-friendly event center and a place for local bands to rehearse and stage shows.

“One of the steps I’m trying is to eliminate the alcohol,” Warner says. “I’m really scared of it being labeled a ‘nightclub.’ I think that label brings along a lot of heartache.”

Warner has been scouting for sites and now has two strong possibilities: a storefront next to a bowling alley on Sebastopol Road and an old grocery store on Petaluma Road. The venue could open as early as this spring.

Musicians, Warner says, “need a refuge to protect and shield them from distractions like police and downtown bureaucracy.” Those common nightclub heartaches are something he has witnessed firsthand as a booker who had two clubs drop away beneath him.

For almost two years, Aurora Sound Presents booked hardcore and alternative bands on weekends at the Moonlight on Fourth Street in Santa Rosa. Warner also took over booking responsibilities in Sebastopol during the waning weekends of Marty’s Top of the Hill, a former country bar that converted to alternative music shows for several months before closing this January.

At the Moonlight–which now operates as a restaurant and bar without live music–Warner witnessed landlord and police pressures to first cut out hardcore bands and then eliminate music altogether. In this case, Warner feels the bands clearly lost a battle of “property owners vs. disrespectability . . . in downtown.”

“[The members of the City Council] have grape values,” he says. “If it isn’t wine, it doesn’t count. They want tourism, not teenagers.”

Hardcore bands took the blame for an incident at the Moonlight last April when a patron cut his elbow in a mosh pit, but Warner claims he was ignored when he asked security to monitor the area. He also notes that “there were more fights on a pool night or when a blues band played [than on hardcore nights].”

But by Warner’s own admission, the roadblocks to a consistent live scene aren’t just club owners or hostile downtown neighbors. The bands themselves sometimes “need help breathing” and “to keep a fire lit.”

Though Warner originally started Aurora Sound as a recording label for his own metal band Daytura, he quickly saw that Daytura’s survival meant expanding his new company’s reach into booking and marketing.

“There was never any coordination,” he remembers. “You’d be booked for a show, but no one knew who was playing or who went on at what time.”

He soon took charge of booking package shows with compatible bands like the Heat Creeps.

“I’d try to put together a good combination that would draw attention,” he says. “You always want to put your band in a position that looks good, so you can maybe catch hold of a few more people for your fanbase.”

Eventually, bands and club owners came knocking. Aurora Sound Presents and Hedgehog Productions teamed up to co-produce Slamfest 2000, which brought eight metal bands from around the Bay Area to play before a crowd of 200 last January at Club Rumors. A second Slamfest is now scheduled for April 27 at Rumors.

But much of Warner’s energy these days goes to selecting a site and securing sponsorships and permits for the venue he hopes to open. The facility would feature Aurora Sound’s equipment as the house sound system, which bands could rent for performances, rehearsals, or social events.

BECAUSE the space will be open to underage rockers, Warner wants to encourage parents’ involvement. “I want to make the community more responsive and accepting of the idea of a teen center,” he says, noting that clubs like the Inn of the Beginning and the Phoenix Theatre have staying power because they’re willing to do all-ages shows.

“Teens can have a place to go and have sound equipment available, an affordable place to rehearse,” he says. “Parents that help have to know it’s a safe place.”

Warner’s vision of a musical event center is part labor of love, part business decision: “Being a musician, I know what the hitches are,” he explains. He wants to contribute to the local scene, but he also has to stay in the black, so bands renting the center would need to put down a deposit.

Still, the question of money aside, Aurora Sound would be offering Sonoma County bands something they badly need–a venue of their own.

“Every time someone puts up money for a teen center, it becomes a senior center,” Warner says. “But not a whole lot of people look at it from the musician’s point of view.”