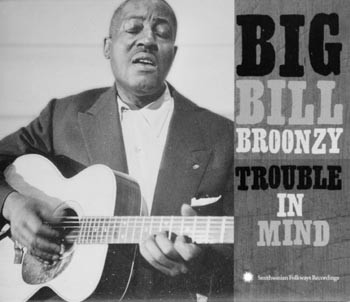 AUTHOR and journalist Studs Terkel once called Big Bill Broonzy “our land’s most distinguished singer of undressed blues. . . . He sings what he knows, rather than what he thinks he should know.”

The brilliance of this often overlooked bluesman radiates throughout the 21 tracks on Trouble in Mind (Smithsonian/Folkways), a newly released and spectacularly remastered collection that shows why the Mississippi-born Broonzy–one of the first to blend rough rural blues with the urban experience–deserves to stand beside Robert Johnson, Muddy Waters, and B. B. King in the pantheon of American blues. Recorded in 1956-57, shortly before Broonzy’s death in 1958, the songs on the new release were culled from studio recordings from Folkways Records, live radio broadcasts originating from Chicago’s WFMT-FM, and a Northwestern University concert.

The social messages that often marked Broonzy’s songs can be heard throughout, a fact that made him particularly popular with the then-emerging folk revivalists. Pete Seeger–who once described Broonzy as “a great picker, a great singer, a composer of over 300 blues, and, above all, a great person”–accompanies Broonzy on “This Train.”

But for the most part, this is unadulterated Broonzy. Folkways founder Moses Asch chose to record him solo and acoustic–a format that spotlighted Broonzy’s intensely personal, emotive style. It’s a setting that musicologist Bill Randle would utilize in 1957 to capture Broonzy in music and dialogue on the classic five-LP set The Bill Broonzy Story, reissued last year as a three-CD box on Verve Records.

Broonzy as a concert performer was a highlight of last year’s three-CD box set From Spirituals to Swing (Vanguard), which featured the historical 1938 and 1939 John Hammond-produced Carnegie Hall concerts that first introduced African-American blues and jazz performers to mainstream American audiences. Broonzy had been brought on board at the last minute to fill in for Robert Johnson.

The repertoire on Trouble in Mind runs the gamut from traditional folk and spirituals to country and talking blues. There is a powerful solo rendering of “Key to the Highway,” a hit for Eric Clapton during his Derek and the Dominoes phase.

A serious performer who once considered becoming a minister and shunned the notion that blues and spirituals should be mixed, Broonzy possessed a joy of life and the ability to make you believe that you can be redeemed through song.

And that’s a rare talent.