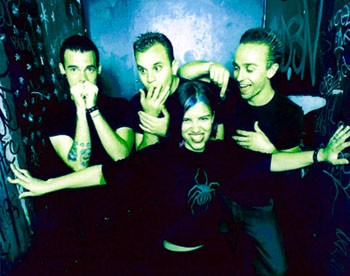 And A Bottle Of Rum: Tsunami Bomb are more punk rock than pirate.

Tsunami Bomb return to the North Bay in Californopia Tour

It’s the postspring break, presummer vacation period for the collegiate crowd, a time when sunny afternoons, good-natured rowdiness, and loud music can easily take precedence over one’s studies. Sticking to the books will only get harder when Petaluma’s Tsunami Bomb makes a rare stop in the North Bay on Saturday, May 11, with a free outdoor concert at Sonoma State. San Diego-based Unwritten Law and the Orange County band Something Corporate share the bill with Tsunami Bomb for the Californopia Tour.

Riding the crest of a wave built by intensive touring and passionate live shows, Tsunami Bomb have attracted a far-reaching base of devoted fans that has generated a mounting buzz in the punk-rock world. Last year, they scored a supporting slot on the Vans Warped Tour–this decade’s answer to Lollapalooza–and this summer the band will return to play 15 dates on the Warped Tour 2002.

After signing with Kung Fu Records (home to the Vandals and the Ataris), Tsunami Bomb recently wrapped up recording their first full-length album, The Ultimate Escape, in Los Angeles with producer Steve Kravac. Previously Kravac has worked with MXPX, 7 Seconds, and blink-182. “Steve is really pushing us to another level for this album. We pushed the boundaries a bit more with this one, I think,” said bassist Dominic Davi in the band’s recording journal. The Ultimate Escape is slated for release in September.

Some fans have come to describe Tsunami Bomb as “pirate punk,” largely due to their delicious purple vinyl Mayhem on the High Seas EP, whose song “3 Days and 1000 Nights” contains a barrelful of yo-ho-ho’s and whose cover art depicts a neon-bright pirate chick splashed across the sleeve. The term, however, is hardly representative of the band’s high-energy guitars, pop-punk hooks, and comic-book lyrics.

Like any ambitious North Bay punk band, Tsunami Bomb cut at least half of their teeth playing at the venerable Phoenix Theatre. Davi started the band in the late ’90s, but the true roots of Tsunami Bomb’s present incarnation really began once drummer Gabriel 37 and vocalist Agent M (an energetic cross between a vamp and a pixie who sports a trademark streak of blue in her hair) came on board.

Hunter, the bass player for spooky goth-punkers AFI, noticed the band at their Sonoma County shows and in 1999 put out Tsunami Bomb’s first two releases on his label, Checkmate Records: the B-Movie Queens, a split EP with the band Plinky (who then merged with an early Tsunami Bomb to form the basis of Bomb’s current lineup), and Mayhem. Both are out of print and fetch upwards of $40 on eBay.

Shortly after The Invasion from Within, the band’s first nonvinyl EP, came out in 2000, guitarist Brian Plink quite and was replaced by Mike (that’s right, just Mike). Keyboardist Oobliette Sparks also parted ways with Tsunami Bomb before a tour supporting the Ataris, and the band opted not to replace her, a decision that has led their music to brandish more rock and less pirate.

Last year, Tsunami Bomb appeared on the Live 105 Local Lounge, Volume 3 CD, and the band’s “Take the Reins” on the Warped Tour 2001 compilation CD proved a standout track. The Sonoma State stop will be Tsunami Bomb’s last date in Northern California until the Warped Tour returns to San Francisco in July.

Current MTV sensations Unwritten Law have been gaining exposure through their single “Seein’ Red,” which has landed them appearances on Last Call with Carson Daly and the Late Late Show with Craig Kilborn. Rolling Stone referred to Unwritten Law’s latest album, Elva, as “No Doubt overdosing on testosterone.” There could barely be a more appropriate live soundtrack for an end-of-the-year concert on a college campus. Unwritten Law dabble in more musical styles than the average So-Cal punk band, flirting with thrash and emo in their ska-tinged songs.

Young and fresh-faced (vocalist and pianist Andrew McMahon is all of 19), Something Corporate recently released their first major-label album, Leaving through the Window, whose single “If You C Jordan,” has garnered radio airplay throughout the country. Though they cite Elton John and Billy Joel as influences (hence the piano), Something Corporate still maintain a modern rock guitar edge to their pop-punk sound. The Orange County band will be playing the main stage of this summer’s Vans Warped Tour 2002 along with Tsunami Bomb.