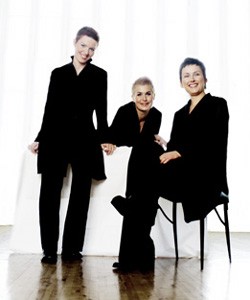 Jesus freak Mel Gibson, director of The Passion of the Christ, isn’t the only artist tapping into the religious fervor of the Easter season, though he is probably the most hyped. A veritable basketful of new classical CDs is on the racks. But it is a trio of polyphonic vocal discs that are the standouts.

Probably the most talked about is Soir, dit-elle (ECM New Series) by Trio Mediaeval. This follow-up to the female vocal ensemble’s critically acclaimed 2001 debut Words of the Angel blends the old and the new, the simple and the complex. This Scandinavian trio–Anna Maria Friman, Linn Andrea Fuglseth and Torunn Østrem Ossum–evoke the transformative mystery of ancient and modern religious music while shifting effortlessly from unadorned monophony and Caelian chants to haunting polyphony. On this remarkable disc, sections of 15th-century composer Leonel Power’s “Missa Alma Redemptoris Mater” are interwoven with 20th-century works by Ivan Moody, Gavin Bryars, Andrew Smith and Oleh Harkavyy.

The resulting music is both beautiful and profound. It is on a par with both the hugely popular Anonymous 4, who top Billboard‘s classical charts with their heavenly recordings of medieval chanting and polyphony, and Gothic Voices, who moved sacred vocal music into the mainstream with A Feather on the Breath of God (Hyperion), their stunning 1986 collection of hymns and sequences by 12th-century abbess Hildegard von Bingen.

After years of exploring medieval European music, Anonymous 4–Johanna Maria Rose, Susan Hellauer, Ruth Cunningham and Marsha Genensky–have tapped into this nation’s religious roots on American Angels: Songs of Hope, Redemption and Glory (Harmonia Mundi), an overview of Anglo-American sacred music that ranges from 18th-century psalmody from New England to 19th-century shape-note songs from the rural South. Some of these songs will no doubt be familiar; the text of John Newton’s “Amazing Grace” pops up twice. And many of these songs and distinctive song forms have gained exposure through such singers as Emmylou Harris and on the recent Cold Mountain soundtrack.

This is a long way, culturally, from the ancient chants and polyphony of the female quartet’s 1992 debut An English Ladymass, but the purity of their voices on these simple hymns is nothing short of baptismal.

One of the most arresting new recordings of sacred music is Nebbiu: Canti Sacri Corsica (Harmonia Mundi), the debut of medieval chants and polyphony from Tempus Fugit, a male quintet who concentrate on ancient religious songs from the Nebbiu region of Corsica. While the singing of Trio Mediaeval and Anonymous 4 has a light, ethereal quality, the bass-heavy Tempus Fugit deliver swooping glissandi that call down the Holy Spirit while grabbing your fifth chakra and delivering a Latin lesson you won’t soon forget.

One of the most powerful songs here is “Messe Vultum Tuum,” a reconstructed Roman mass from the seventh century that is based on the belief that the singers, through their breath and sound, can attain a level of purity that will result in the manifestation of the Virgin Mary’s face. Powerful stuff.

Too powerful, in fact, for the early Christian church. “Messe Vultum Tuum” was banned in the 11th century and lay dormant for a millennium until it was resurrected by ethno-musicologist Corinne Bartolini with harmonizations by Antoine Tramani, and given voice by Tempus Fugit.

The Miró are rapidly becoming one of my favorite young quartets. It is often said that the Miró are a powerhouse ensemble that play with the unified sound of a string-driven machine. There’s truth to that notion, though there is nothing machinelike in these heartfelt readings. Both works share a common bond as the last string work by a pair of great composers steeped in sorrow. The Mendelssohn String Quartet in F Minor, op. 80, is an ode to the composer’s dead sister and his last complete score before succumbing to grief within weeks of its completion. It is a staple in the quartet repertoire. The Miró draw on the boundless sadness and beauty of this piece and lend the allegro molto finale a rawness that some critics mistake for youthful indiscretion. I hope the Miró never lose that edginess.

The Schubert String Quintet in C Major, D 956, op. post. 163., is equally strong. During his final days, wracked with delirium, Schubert crafted two works as part of a song cycle he called “Schwanengesang” (literally, his swan song): the first, an unusual trio for soprano, clarinet and piano; and the second, this stunningly gorgeous quintet for string quartet plus cello. This is the Miró at their best with the talented cellist Matt Haimovitz in tow.