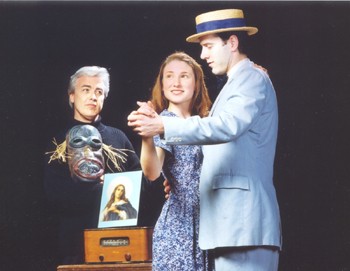 Painted by Memory: Craig Mason (from left), Elana Kepner and Michael Smith are among the players in ‘Lughnasa.’

Memories do not return to us whole, but in pieces, with certain bits standing out clearly while others are missing entirely. Brian Friel’s 1992 Tony-award-winning drama Dancing at Lughnasa is, among other things, a play about memory, and its current staging by the Pacific Alliance Stage Company beautifully highlights this theme by conjuring a detailed vision of a small Irish farm in 1932–and then leaving out random scraps and fragments.

The house, for example, where Michael Mundy (Craig Mason), the now-grown narrator, was raised by his mother and four aunts is only partly there on the stage–a couple of walls, half a window, a roof that arches up above the cottage and then simply stops in midair. When Michael’s mother, the young, romantically inclined Christina (Elana Kepner) sets out to do some ironing, we see the old ironing board and the fabric, but the iron in her hand, sliding purposefully up and down the board, is not there. We see the aunts knitting and cooking, but the knitting needles and the stirring spoon are often gone from the picture.

In this way the bittersweet Lughnasa progresses, with the audience seeing only those parts that remain the strongest in the narrator’s somewhat fading memory. The most powerful reflection of this is that Michael does not see himself in these memories–and neither do we.

In those scenes involving his boyhood interactions with his family, the grown narrator stands in the yard of the house, while his mother or his aunts kneel or stoop beside an invisible boy. When they talk with him, it is the grown man standing at a distance who speaks the words of the young Michael. Such visual poetry infuses the entire production, sensitively directed by Hector Correa with a sense of heartbreaking frailty, a lovely construction of rich nostalgia built on a foundation of loss and sadness.

The story takes place on the eve of Lughnasa, a pagan festival honoring Lugh, the ancient Celtic god of light and music. The unmarried Mundy sisters–Maggie, Agnes, Christina, Kate and Rose–live in an Ireland that is shakily balanced between the pagan observances of its past and the strict Christianity of the present. The women have their own memories of having danced under the moon at Lughnasa celebrations when they were young. But the eldest sister, the emotionally straight-jacketed Kate (an astonishing, complex performance by Phoebe Moyer), no longer approves of such un-Christian behavior; the family has already been rocked with scandal once, as young Michael is the illegitimate product of a seven-year-old dalliance between Chris and a traveling Welsh charmer named Gerry (Michael Smith).

Now, their beloved missionary brother Jack (George Maguire) has returned home after 25 years in Africa, though it seems clear that he was the one converted, and not the other way around. With the village buzzing with rumors that Father Jack has “gone native,” the sister find their standing in the community once again at risk.

When Gerry suddenly reappears to woo Christina, Kate attempts in vain to keep him away, sensing that his involvement will lead to the family’s disintegration. She’s right, though in the end she’s as much a cause for her sisters’ fate as is Gerry or Jack or the prurient gossip of the community.

The cast is uniformly excellent, giving lived-in, three-dimensional performances that never stray into cliché. The most vivid performance is Moyer’s dead-on portrayal of Kate, and in many ways, it is Kate who stands at the center of the play. She is the one who best reflects the playwright’s examination of the bonds of culture and the yearning of the human spirit. Like Kate, life is alternately beautiful and powerful, and it is frequently unfair.