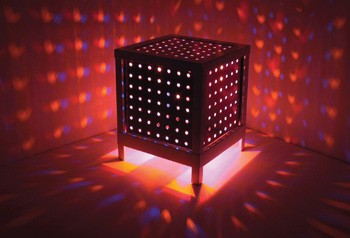 ‘Light is hard to work with, it’s very temperamental,” explains Trey Gerfers as he opens the door of his studio in Point Reyes Station, revealing a pile of ancient speaker cabinets, gutted TV sets and antique radios stacked high against one wall. These are the skeletons of what will eventually become “Stereoluz,” a word Gerfers coined to describe the ambient light sculptures he creates from recycled audio components and modern lighting effects (luz, pronounced “loose,” is Spanish for “light”).

In the back of the studio, a number of completed Stereoluz pieces glow softly in a darkened corner. “Tee-Light” features a pair of rectangular speaker cabinets, cemented together in a T shape, the internals ripped out and replaced with orange, red, blue and green theatrical gel lights. “Reel-2-Real” is, aptly enough, an old tape recorder, reels removed and replaced with a tweed covering, through which red and amber lights shine through. Gerfers tweaks on the recorder’s tuning knobs, which now control the mixture of red and amber, the tone of the light, rather than the tone of the sound. With the knobs, one can quite literally set the mood for just about any situation.

“A lot of these pieces need a special space,” Gerfers says. “I always encourage people to think of something that will provide ambiance in a dining room or a bedroom. It’s something for nighttime, to make love by.”

Gerfers, whose formal training is in languages and translations, has always been interested in lighting design; early creations included old heating lamps transformed into quirky light sculptures. However, his interest really took off after moving to Berlin in the late 1990s. “Berlin is so dark, and there’s a sensibility about ambient lighting that’s not found here,” he says.

He moved to San Francisco in 2000, first working for a design firm building models of buildings for future cities. Around the same time, he started Stereoluz, mass-producing his own designs as well as creating one-off art pieces using old stereo components, maps and other found objects. One of his original designs, the Point Rays Lamp–a perforated cube one foot on each side through which various colored lights emanate–has proven popular enough to support his true love, creating original works of ambient light art.

“It’s funny, they kind of select me,” he says, gesturing toward the stack of old speaker cabinets. For instance, the holes in the speaker cabinet used to create “Planets,” one of the completed pieces in the back of the studio, reminded Gerfers of a 2003 news report he’d seen on the Galileo spacecraft’s visit to Jupiter. The holes now glow a luminous red, reminiscent of the gas giant’s angry red spot, or one of its many moons.

He taps lightly on the touch-sensitive rheostat fixed to the piece’s side, and the light passes through four phases of intensity, from bright to off. Gerfers designs each piece to look good whether it’s on or off. He touches the rheostat on “Tee-Light,” switching it off and transforming it into a marble white abstract sculpture. “Very Yoko Ono,” he quips.

The most aesthetically compelling transition occurs in pieces that employ translucent wood veneer, a medium Gerfers uses often. The most impressive piece is a large former coffee table he has tipped over on its end. When the lighting inside is switched off, it looks like an enormous block of solid wood. When the lighting is switched on, the wood grain becomes liquid and alive, appearing to drip down the surface.

A world traveler, Gerfers is partial to including maps in his designs, including the piece “Sectional Seashore,” in which a map of Point Reyes (a durable, waterproof plastic trail guide made by local cartographer Tom Harrison) is presented in five arranged speaker cabinets, creating a cubist effect.

Gerfers is clearly proud his work, which ranges in price from $150 for the mass produced Point Rays Lamp to $2,300 for one-off pieces. If effort is any gauge, the price is worth it. In order to create Stereoluz, he must work in the light and the dark, with constantly shifting aesthetic variables. That’s why he describes working with light as “temperamental.” Nevertheless, there’s no doubt he loves what he’s doing.

“A lot of people who come out here have seen a lot, they’ve seen it all,” he beams. “But they haven’t seen this.”

Trey Gerfers joins other local artists for Point Reyes Station Open Studios on Memorial Day weekend, May 28-30, from 11am to 5pm. Opening reception Friday, May 27, 4-7pm. For more info, go to www.pointreyesart.com.