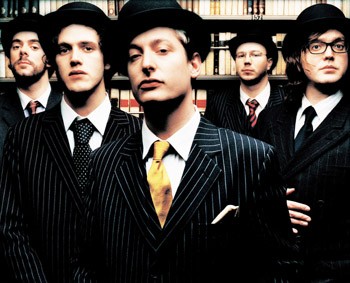 We Will, We Will Audit You: Gomez wants to check your financial statements.

Considering that his band have just lost their contract with one of the world’s hippest major labels, Gomez vocalist, guitarist, keyboardist, bassist and songwriter Tom Gray sounds quite pleased with the way things are shaping up, at least in a low-key British sort of way. “We finished our contract with Virgin Records, and we’ve been through the ups and downs of watching the major-label record industry collapse in on itself,” says the affable Gray during a phone interview from the Ohio University campus.

“It’s been all about the art of survival for the past few years.”

If their recent live shows and the advance copy of the upcoming live album Gomez Out West (ATO) are any indication, the band have come through their ordeal stronger than ever. The two-CD live album captures Gomez’s eclectic Manchester-meets-the-Rolling-Stones sound in all its blues-inflected glory. It features 18 live versions of songs from the band’s four studio albums, as well as a cover of the obscure Tom Waits song “Going Out West” (first recorded in 1998 by British pub rockers Dr. Feelgood) and Nick Drake’s “Black Eyed Dog.” Gomez recorded the album in January during three sold-out nights at the Fillmore in San Francisco and it is due for a June 7 release.

“We wanted to draw a line between that stuff we did with Virgin and what is to follow. We thought a good way to do that would be to record a live record,” Gray explains. “It was a good way to tie up all the loose ends. The band had never done a live album, despite our reputation as a good live band, because Virgin would never let us do one. We were up against the wall all the time with them. They just didn’t understand.”

Gomez have indeed endured their share of ups and downs. The band members grew up in the suburbs and emerged from Liverpool and Manchester bored with the retro sounds of Oasis and the trip-hop of Portishead and other trendy bands riding high on the 1990s Manchester music scene. Their 1998 debut Bring It On was full of catchy, straight-ahead bluesy rock that won rave reviews on both sides of the pond and earned a prestigious Mercury Music Prize.

After the sonic experimentation of 2002’s In Our Gun, last year’s somewhat laid back Split the Difference marked a return to form to the straight-ahead sound of their acclaimed debut. The blues-tinged, slightly psychedelic waltz-time ballad “Sweet Virginia” (not a cover of the Rolling Stones song by the same name) alone was worth the price of admission.

“It was a fun record,” Gray says of Split the Difference. “We had fun making it. In Our Gun was a grand, pretentious record. With Split the Difference we said, let’s make a rock ‘n’ roll record and enjoy ourselves, get a few good tunes together and record them as simply as possible.”

The search for a pace to record Gomez Out West led the band back to San Francisco, its unofficial U.S. base. “It’s quite a strange and beautiful thing that San Francisco has become this American home for us,” Gray muses. “I think that what we do just connects with people there-they just understand it. There’s a whole eclecticism and psychedelic aspect. They’re just ready for what we do.

“I mean we’re saying, fuck musical styles, fuck all of that formula stuff, let’s just enjoy music for what it is. And somehow that makes sense to people in San Francisco.”

Throughout the personnel shakeups at Virgin, which included a series of firings that removed staff responsible for marketing Gomez’s albums, the band struggled to stay together. “Basically, we’ve just stayed on the road the whole time for the past two and a half years,” Gray adds. “It’s sort of a tale of redemption because now we’re done with all this major-label shite–it’s a very exciting time, because we don’t have to worry about the shareholders anymore. The folks at ATO are very cool people who just want to put out great records and take care of them.”

Gomez already is laying plans for a new studio album. “We have a lot of new material written and ready to go,” Gray says. “We’re just waiting for someone to press the button and say, ‘Go for it!’ This is the moment for us. We’ve done the groundwork. We’ve played in every small town in America, we’ve been around the block. And a lot of people have a lot of faith in us. For various reasons, in the past, we never quite connected in a big way, but it seems that it would be quite easy to connect with people, if they could just get to hear it on record.”

So is the straight-ahead sound of Split the Difference a road map for the future?

“No, we’ve done that now,” Gray says with a laugh, “The next thing is something again. I’m feeling a more mellow, lyrical vibe coming along.”