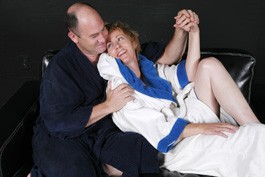 Looking back at the best stage work of 2007

At the close of each year, I observe a little ritual by which I determine which 10 shows I’ve seen are the best and brightest theatrical memories of the last 12 months. First, I take down the cigar box in which I keep all of the torn ticket stubs I’ve collected in my adventures in and out of theaters and concert halls across the North Bay and beyond. From the pile of local productions, I make a quick division between those I’m glad I saw and those I’d rather have been getting warts removed than sit through.

For 2007, a year that packed my cigar box to near overflowing with torn tickets from more than 60 plays, 45 movies and 27 concerts, this ritual has not been easy. With so many good shows on the local boards, there have been far fewer stubs in my wart-removal pile than usual, making the elimination all the more difficult. Some, like Pacific Alliance Stage Company’s Moon Over Buffalo and You’re a Good Man, Charlie Brown, or the Sonoma County Repertory Theater’s As You Like It and the Sixth Street Playhouse’s The Big Bang and Top Dog, along with Narrow Way Stage Company’s youthquake version of Julius Caesar, only narrowly missed being included. Making such choices is a good problem, and we in the North Bay who attend live theater know how fortunate we are to have so much passionate, magical and well-acted theater to choose from.

1. Marin Theatre Company, ‘Frozen’ No play I saw this year, anywhere, shook me and moved me as much as Bryony Lavery’s stunningly humane drama Frozen. Directed for MTC last January by the great Amy Glazer, the gorgeously written drama follows the intense and evolving relationship between a murderer (Rod Gnapp), his victim’s mother (Lorri Holt) and the psychologist sent to study him (Stacy Ross). Written with intricate attention to detail, staged with compassion and wit, acted with such brilliance I found myself watching in open-mouthed wonder, this play accomplished the near-impossible task of taking a deeply ugly subject and turning it into something achingly lovely and unexpectedly, unforgettably beautiful.

2. Marin Theatre Company, ‘Love Song’ The Marin Theatre Company struck again with September’s unveiling of John Kolvenbach’s sneaky-smart Love Song, a strange, funny and poetic play about a terrified, emotionally unstable, near-agoraphobic man named Beane (Darren Bridgett), who is transformed into a sense-hungry lover of life after a bizarre encounter with Molly (Jody Flader), a sexy burglar who may or may not exist. Directed by Jasson Minadakis with a sensitive feel for the delightfully weird, slightly surreal language Kolvenbach cooks up for his characters, this was a play about love that was crazy and wise all at the same time.

3. Mountain Play, ‘Hair’ Jim Dunn is the best director of musicals working in the North Bay, and his exuberant reinvention of 1967’s Hair worked remarkably well inside the massive amphitheater where the annual Mountain Play is staged. With a magical realism ending that electrified Sunday afternoon audiences of some 3,000, Dunn’s eye for spectacle was perfectly suited to the 40-year-old rock musical about hippies wrestling with life, death, love and reality during the Summer of Love. The young cast beautifully resurrected the manic-depressive spirit of the 1960s, as Dunn took a play that could have been dated and ridiculous and turned into something fresh, immediate and emotionally satisfying.

5. Summer Repertory Theatre, ‘Working’ Last summer, James Newman took the reins of SRJC’s annual Summer Repertory Theatre, and dazzled us with his energetic production of Studs Terkel’s seldom-seen 1978 musical, Working. With a strong cast and vibrant visual style, this tuneful celebration of working-class people might have been plotless, but it was far from pointless. From start to finish, Working rocked hard.

6. alterTheater of Marin, ‘Catherine’s Care’ Last February, under the care and feeding of San Rafael’s eccentric alterTheater company, actor-playwright Robert Ernst unveiled a lively little play about the tail end of life, a playful, surreal, experimental musical about the final days of a once-independent woman, Catherine (a wonderful Jenna Johnson), who finds herself examining the details of her life as she surrenders the care of her failing body to others. The difficult material, in Ernst’s hands, ended up being simultaneously moving and funny.

7. Cinnabar Theater, ‘Clean House’ In Sarah Ruhl’s dangerously hilarious comedy-drama, we learn that ice cream is what God eats when he’s tired, that it is better to die standing up than lying down and that the perfect joke always lands somewhere between an angel and a fart. Director Tara Blau and a fine cast worked wonders with Ruhl’s giddy play about a brilliant, neatnik doctor whose surgeon husband has fallen in love with an elderly mastectomy patient, and whose cleaning lady would rather think up jokes than clean. The wordplay alone was worth the price of admission.

8. Sonoma County Repertory Theater, ‘Bullshot Crummond’ My sides still hurt from laughing so hard as director Squire Fridell presented the deliriously idiotic play Bullshot Crummond last January. A spoof of pulpy English mysteries, highlights included Dodds Delzell bringing the house down with a meticulously timed bit in which he morphed back and forth and back and forth again from an Italian hit man into the preposterously evil Otto Von Brunno, quick-changing with deceptive ease. As Otto’s wife Lenya, Priscilla Locke did astonishing things with her face, and as the requisite virginal damsel in distress, Jennifer Coté found shades of complication in her character that were likely not dreamed of by the playwrights. Dan Saski, as the detective Bullshot, was dashingly clueless, and Eric Thompson, as a whole slate of people, was magnificently over-the-top and side-splittingly funny. Ouch.

9. Marin Shakespeare Company, ‘The Complete Works of William Shakespeare (abridged)’ In spite of the fact that this is rapidly becoming one of the most overperformed plays in the world (pace yourselves, gentlemen, pace yourselves), the version that opened the Marin Shakespeare Festival found plenty of ways to make the play seem as original and creative and ridiculously inventive as it did when it first appeared on the scene. Under Robert Currier’s direction, Darren Bridgett, Ryan Schmidt and Jarion Monroe were spectacularly foul, and a joke about a beaver, which definitely went too far, was nevertheless hilarious.

10. Sixth Street Playhouse, ‘The Grapes of Wrath’ While John Steinbeck’s grand fever-dream of a novel suffers somewhat from the literary liposuction used to shrink the vast fiction down to two-act size, director Elizabeth Craven’s grand vision of the play helped pump this production back up to epic size. With an old truck pushed here and there onstage, an orchestra pit filled with water to simulate a river, and with real rain falling during the storm scenes, the show had a vigorous visual splendor that was matched by the commitment and intensity of the large, expertly directed cast. Visually impressive, this memorable play stretched the possibilities of what can be done onstage in the North Bay.