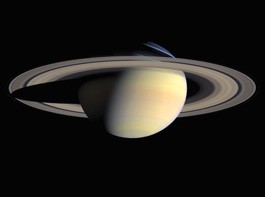 Ever wanted to visit outer space?

With the underfunding of NASA, a more feasible option is the Petaluma Museum, with spectacular images, real-live astronauts and artifacts from the final frontier. Starting May 7, the museum hosts ‘Beyond: Visions of Planetary Landscapes,’ a new Smithsonian traveling exhibition featuring 35 composite photographic prints by artist Michael Benson.

The poster-sized images were compiled using planetary research data collected from satellite cameras and roving robots that landed on Mars, Venus and the moons of Saturn and Earth. “During the last year of the space shuttle and with the lack of emphasis on our space program,” says museum president Joe Noriel, “it’s our chance to reenergize the interest for space in the new generation.”

Meteorites loaned by the California Academy of Science are also on view along with space exploration memorabilia. A galaxy of speakers, including Apollo 9 astronaut Rusty Schweickart, artist Michael Benson, astronomers, NASA research scientists, geologists and SRJC and SSU professors of astronomy and physics expound on the excitement of exploring the universe each Saturday. A film on the space shuttle missions, The Dream Is Alive, is offered as well. “It’s an emotional and introspective experience,” says Noriel. “You’ll leave the exhibit a changed person, with an appreciation for the unique world we live in.”