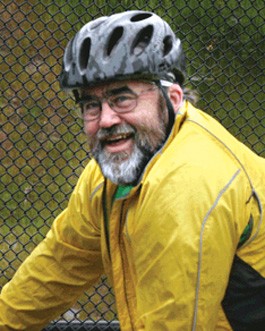 Helfrich takes the helm at a challenging time. The SCBC’s original plans for the Humboldt Street Bicycle Boulevard were dismantled by the Santa Rosa City Council last year, while in December, a proposed pedestrian and bicycle bridge over Highway 101 caused controversy. Helfrich begins by leading a team in the Team Bike Challenge, a National Bike Month event promoting long-term bicycle commuting habits. More information at www.youcanbikethere.com.

As executive producer of Block Report Radio on KPFA, JR Valrey has interviewed a multitude of political and culture figures. His new book, Block Reportin’, collects his interviews with Mumia Abu Jamal, Paul Mooney, Gil Scott Heron, Cynthia McKinney, Mos Def and others. Valrey writes: “The news I help to broadcast is for the low- and the no-income, the people of all ages that live in the ghettos and barrios, the people that schools are not reaching.” An assistant editor at the San Francisco Bay View newspaper, the evocative and controversial political journalist speaks on Monday, May 9, at Sonoma State University. Stevenson Hall 1002. 1801 E. Cotati Ave., Rohnert Park. 7pm. Free. 707.664.2588.