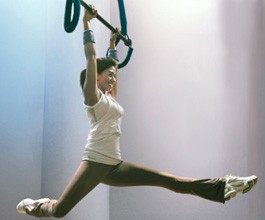 Higher minds have looked to fitness fads and found them good

Last month the American Council on Exercise released its top 10 exercise trends for 2010, underscoring the wisdom that we want to save money while we save time while we save what we can of our bodies while we use the latest gadgets while being trained by instructors who have actually themselves been trained. Basing their results on a fairly exhaustive survey of fitness professionals and club owners, the ACE predicts that this year it will all be about . . .

Cost-Conscious Workouts Less personal training time, perhaps even less gym-membership time, will be spent as the Great Recession drags endlessly on, capturing too many of us in its sooty tide. Of course, exercising and staying fit are important job-seeking tools, as they help to abate depression and act to clear the brain. Plus, it gives you something to do until Oprah.

Buddy System Group training rather than personal training marks this year as belt-tighteners look to shave more than just inches by having small knots of strangers sweat alongside them to split the cost.

Exergaming Perhaps the most ungainly word of the decade, “exergaming” refers to engaging Wii and other electronic games as a prompt for movement. Health clubs and gyms are embracing the trend as it means less actual human instructors on the payroll. Actual humans seem to like it just fine anyway.

Boom Boom Rooms That young crop of new elders just aren’t willing to give up and die the way their grandparents were, and to that end are exercising more and staying healthy longer. Expect to share a mat with an AARP member who can kick your ass before breakfast, and remember to thank them.

Like in Real Life Evolved from rehabilitative therapy, functional training focuses on building strength through a focus on disparate muscle sets with specialized equipment. Those TRX pulleys, developed by a former Navy SEAL and easily adapted to an office or home door frame, are predicted to grow in popularity as more folks choose to get a quick informal workout near the copier or the stove.

Getting It Not wanting to let the great opportunity of a crisis go by without acting, an increasing number of us will get off our more-than-amples and exercise and diet this year. We don’t actually believe it, but that’s what the experts say.

License at the Door As consumers become more savvy about their exercise dollars, so too are we becoming more demanding of our instructors. Certification and licensing is on the rise as more employers expect their trainers to have had some, um, training. Good news for everyone.

Novelty Niche If getting your heart rate up for 30 minutes a day and eating less were all it took to lose weight, everyone would do it. Right? Not so much. We’re a flighty species, and the prospect of exotic exercise gets our hearts and brains pumping faster than a wind sprint up 10 flights of stairs. Most of all, we don’t want to notice that we’re exercising, and if that means undulating to Bollywood soundtracks or somehow keeping a slippery hula hoop in motion, we’ll do it.

There’s an Ab for That As a Certain Someone in our office who has selfishly lost 16 pounds over the last few months simply by using the free Lose It iPhone app can attest, knowing exactly how many calories there are in that can help a girl decide whether or not to savagely stuff it in her craw and rapidly gulp it down. This Certain Someone—who really should think of others by eating much more than her iPhone currently allows—says that knowing the calorie count of everything and her own daily limit is like being given a fresh wad of cash every day. “I just decide how to spend it,” she says, the hollows of her cheeks mimicking the mandibular ways of runway models.

Ranging from free to not-so-much, iPhone does indeed have apps for everything from managing kettle balls to practicing yoga available at that online store of theirs. Not for the iPhone but recommended by the ACE are the tracking items GoWear Fit and Fitbit. Our Certain Someone could probably recommend them, too, if she weren’t so weakened by selfishly maintaining her ideal healthy weight while making it seem so easy . . .

Speaking of those darned exotic exercises, the mash-up is in, particularly when it comes to the core. Witness piloxing, a combination of pilates and boxing. According to the exhausted young reporter that the Times of London sent to the gym to try this stuff out, such cross-training was designed to create “an army of sleek, sexy, powerful women” who can high-kick an intruder in the face while maintaining a healthy and engaged lower back and strengthening their Kegels.

Then there’s TenPilates, a caffeinated hep-up that results in an aerobic high somehow achieved while prone on those torture sleighs known as “reformer beds.” Spin-Lates has participants jumping from the stationary bike after 30 minutes of sprints and uphill climbs directly to the unstable playground of the proformer machine for half an hour of ungainly gravity-sucking stretches that cause muscles to freak out as they scramble to stabilize. Eeeevil . . .

And finally, the hot new exercise that we’re not going to try because it’s only been introduced in 21 cosmopolitan cities around the world (think Sydney and Manhattan, not American Canyon and Cloverdale) is Jukari. Developed by Reebok and Cirque du Soleil, Jukari not surprisingly requires lots of coolio Reebok-branded equipment and special sleek Reebok-branded clothing and could probably benefit from a new pair of Reebok-inscribed tennies but essentially can be done by anyone with a rope and a pair of sweats.

A group workout, Jukari has participants swinging en masse on trapeze as well as doing standing pushups and other more traditional moves transposed upright. It looks suspiciously easy to hoist oneself up on a bar and fly across the room with Reeboked knees held high, but if our fitness routines have taught us even one single thing it’s that nothing, not even plain old playing, is as easy as it looks.