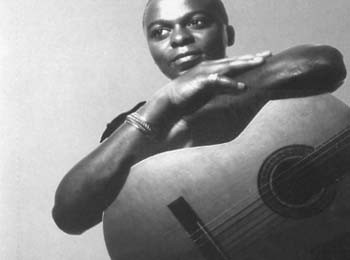 A STONE’S THROW from the Sonoma County Crushers Stadium, where one can watch a unique rendition of America’s favorite pastime, is the main office of World Music Distribution. That an ultra-modern, globe- spanning company with offices in New York City, Los Angeles, and Madrid maintains its nondescript headquarters amidst the industrial warehousing of westside Rohnert Park just adds to the immense irony.

Nestled between a frozen-calzone distributor and endless movers of car audio equipment, the nerve center of WMD could not be more innocuous. The passerby would undoubtedly do just that–pass by, hardly aware that within the confines of Unit No. 1 exists some of the most exotic music imaginable.

Salsa from Japan, Chinese Cha Cha Cha, flamenco, mambo, even a fusion album with the Bulgarian Women’s Choir: a tour through the catalog of Tinder Records (the recording label of World Music Distribution) is both a dizzying assault on the sensibilities for anyone weaned on mainstream American music of the last half-century and a candy store for the musically curious.

Of course, “world music” is a blanket term. One is reminded of comedian Steven Wright’s comment, “You can’t have everything in the world, because where would you put it?”

“There are really two definitions of world music,” says Didier Pilon, co-owner and co-founder of WMD. “In the United States it is everything outside the United States, but in Europe it mostly means African music. We don’t mix that with Latin.”

WORLD MUSIC is actually a marketing concept that began in London in 1987. Only an international style that proves commercially viable enough to warrant its own heading at the record stores is allowed to slip from the world music banner. Reggae and ska seemed the first to shed this onus and swam on to more profitable waters.

Pilon and partner Sandrine Direnzo began WMD from a garage in New York City shortly after arriving in the United States from Paris in 1992 and noticing the “big gap” in world music selections at American record stores.

“I was on vacation and stayed,” laughs the young Sebastopol resident, who admits to being too broke at times even to “buy a hotdog” in the early days.

After fleeing New York to Mill Valley in 1993, soaring costs in Marin forced the rapidly growing company north to its current Rohnert Park location. Since arriving in Sonoma County in 1994, WMD has grown 500 percent.

“We do our own manufacturing now,” says Pilon. “We have talent scouts around the world that buy master recordings of artists. We handle the manufacturing and marketing end. We then distribute this international music to retailers entirely within the United States.”

Despite such furious growth, Pilon is still somewhat frustrated with the American consumer audience. “The United States has been such a melting pot for music in the past, but it isn’t anymore. Find me a radio station that plays world music.”

LOCALLY, The Last Record Store in Santa Rosa reports that World Music comprises 10 percent of its sales–a majority of this behind the strength of recent releases from Cuba, which thanks to major label interest have dominated the world music market.

“We are looking for a better marketing tool and to raise awareness,” admits Pilon. “On the local market this basically means concerts. A Sonoma County World Music Festival is something we’re working on for the future.”

Already the county has benefited from Pilan’s commitment. Cameroonian singer/songwriter Henri Dikongue played at the Powerhouse Brewing Co. in Sebastopol last month in support of an album that received considerable critical and commercial recognition. With more events planned locally through October, this seems an opportunity to tap a newly found community resource.

It is easy to tell that WMD and its most visible subsidiary, Tinder Records, are experiencing an exciting period of growth. On the inside, the otherwise nondescript offices are being hastily remodeled in a style that suggests the parvenu. One can only assume that the enormous warehouse space is used for activity of some volume and that all that impressive technology is being used to link up the world even tighter.

The bottom line, of course, is the music. Tinder is committed to a self-described “post-modern” stance epitomized by “cultural interactions and expressions never before imagined,” as well as “concoctions of traditional and the contemporary.”

With these parameters spread around the music of a dozen cultures, one cannot help but be intrigued.

The Inn of the Beginning