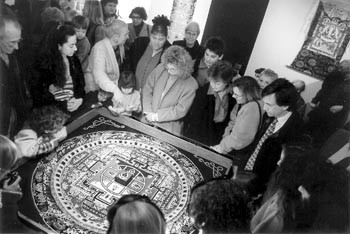 Crowd scene: Large audiences flocked to the Tibetan mandala created last January by the Buddhist monks of the Segyu Lineage. That sand painting was ritually destroyed, but the monks return Dec. 22 to the Sonoma Museum of Visual Art.

GRAIN BY GRAIN and inch by inch it will come to life, slowly taking shape atop a sturdy wooden platform in the main gallery of the Sonoma Museum of Visual Art. Leonardo da Vinci took some four years of sporadic work to complete the Mona Lisa. A devout Catholic can say the rosary in roughly 45 minutes. But the creation of this 5-by-5-foot sand painting, which falls somewhere between the rituals of art and religion, will take three weeks of steady, painstaking labor.

On Dec. 22, monks associated with the Segyu Lineage of Tibetan Buddhism will begin their careful work, using short copper tubes, fine brushes, and colored sand to create the planned sand mandala. It won’t be the first time such a creation has graced the museum’s gallery: Last January, Sonoma County audiences watched in awe as tigers and flames and elegant Tibetan words sprouted in circles of sugary sand. The museum goers gasped and groaned as the monks performed the traditional dissolution ceremony, wiping away what had taken weeks to create.

This time around, SMOVA (known until recently as the California Museum of Art) will also host the creation of several “tormas” (religious icons traditionally sculpted out of yak butter) and the painting of ceremonial “thangkas” (religious tapestries) by A. Tsherin, a secular Tibetan artist. Not surprisingly, organizers expect public interest to be intense.

In recent years, American pop culture has fallen hard for Tibetan spirituality. Movies such as Kundun and Seven Years in Tibet have spun gorgeous Hollywood stories out of the country’s tragic history and fascinating religious rituals. But it’s one thing to catch a glimpse of a sand mandala up on the big screen, and quite another to be in the same room while one is being created. That experience is special, and it seems to hold a profound fascination for people in Sonoma County, according to Maria Hess, a Sebastopol Buddhist and Sonoma State University psychology professor who has been instrumental in organizing the mandala exhibitions.

“People know that there’s something mysterious and wonderful about the process,” says Hess. “The mandala is very, very intricate, and there’s a whole story that plays out as you watch it being created. Every time you come visit, a different piece of the story has been revealed.”

But, she says, while it’s fine to enjoy the sand painting on that level, there’s much more going on than meets the eye of the casual observer.

“What you see is not necessarily what the story really is,” Hess says with a gentle smile. “There are many levels to the mandala. There’s the exoteric level–that which you see: ‘Oh, what pretty colors!’ and ‘Look at the beautiful sand.’ But underneath is the story that the deity who resides in the center of the mandala is the reflection of the Buddha nature in each of us. How we access that nature is the story of the mandala.”

Buddhism tends to giggle gleefully at glib explanations. But, approximately speaking, mandalas are visual representations of certain religious practices. As Catholics appeal to St. Jude for help in finding lost objects, so Buddhists practice rituals like the mandala to reflect certain aspects of themselves that, as Hess puts it, “you are trying to eliminate, or move through, or magnify.” At the center of every sand painting sits a deity, and this year’s is no exception: It is titled “Amithayus: Long-Life Deity.” If you want to know more, the exhibit will feature explanatory classes (see sidebar for information).

Not that you have to be a practicing Buddhist to appreciate the spiritual nature of the mandala. As an example of the ritual’s ecumenical appeal, Hess cites an episode from last January’s exhibit that still fills her with obvious satisfaction. It was a quiet Sunday at the museum until the Christian church that was then located at the Luther Burbank Center (where SMOVA is housed) had just finished its services.

“We had 350 people come in, right out of church, and it was like there was no difference,” Hess recalls. “I knew that what they had experienced in church was still right there on the table in front of them. I didn’t see it separated out, like they had a sense of Buddhist spirituality. It was more like there was a general sense of spirituality, whatever the form may be. That’s what was so wonderful: No matter who they were, people resonated with it.”

Indeed, they resonated so strongly that the exhibit attracted record crowds to the museum–more than 2,000 visitors in all. This year, SMOVA director Gay Shelton says she expects even greater attendance.

SO HOW DID this rare cultural opportunity end up in Sonoma County? The mandalas are actually a gift to local people, bestowed in appreciation by the monks of the Segyu Lineage; the story of the sand paintings’ arrival in Santa Rosa is just the latest chapter in the sect’s ancient story.

Founded some 500 years ago in Tibet, the sect and its special spiritual teachings flourished for generations. Then the Chinese came. In 1959, Tibet was invaded, and Chinese troops destroyed the Segyu monastery. The holy scriptures were burned, the sacred artifacts were destroyed, and many of the monks were killed. The survivors fled across the Himalayas to India.

Today, only a handful of senior Segyu monks remain alive (mostly in Nepal), and the spiritual wisdom of hundreds of years is dangerously close to vanishing. Still, the lineage has begun to experience a revival here in the United States, and the head of the order–Lama Segyu Choepel Rinpoche–now lives in Sebastopol. The monks are now working to renovate and expand their dilapidated monastery in Katmandu, an endeavor that has received generous assistance locally.

Grateful for the help and warm welcome they have received, the monks have twice offered their unique artwork to our area. But this may be your last crack at it: They will not be back at SMOVA next year. Instead, the museum plans to offer a new exhibit of multicultural art.

Of course, for many Americans, the complex history and spirituality behind the sand paintings run a close second to another burning question. All that spiritual power, all that rich symbolism, all that hard work: In the end, it’s all gone. What motivates someone to spend long hours tapping out sand a few grains at a time, only to wipe the whole wonderful creation away? Why not, we wonder, simply preserve the whole thing under Plexiglas for eternity? It’s a familiar question to Maria Hess, and she meets it with a smile.

“That’s actually a really important part of the mandala,” says Hess. “One reason it’s created in sand is because Buddhists believe that everything is impermanent, everything changes, nothing lasts. … Sand is used and then washed away to remind us of that impermanence. Only Buddha nature is indestructible.”