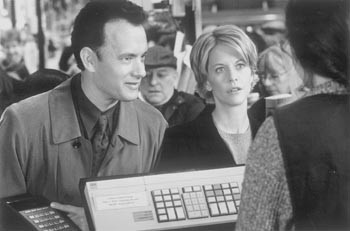 Writer David Templeton takes interesting people to interesting movies in his ongoing quest for the ultimate post-film conversation. The time out, he meets Deb Levine–renowned online sex expert and author of The Joy of Cybersex–to scope out the new romantic cyber-comedy You’ve Got Mail.

I WATCHED The Shop Around the Corner last night,” Deb Levine informs me when we meet outside a packed San Francisco movie house. “I love that movie. I wanted it to be fresh in my mind tonight.” Her enthusiasm is appreciated. In fact, it’s downright contagious. In no time, we’re comparing notes on our favorite romantic movies.

Which is why I am here with Deb Levine. She’s the author of The Joy of Cybersex: A Guide for Creative Lovers, the fast-selling new how-to book in which the art of fooling around and falling in love on the Internet is humorously explained, explored, and demystified.

The San Francisco-based author has herself only recently emerged from the domain of the anonymous; for years Levine has been something of a legend in cyberspace, though never before under her own name. Several years ago, using the pseudonym Alice, she created the award-winning sex-and-health website Go Ask Alice at Columbia University. Later, she became Delilah–“the Dr. Ruth of cyberspace”–on the health-oriented website thriveonline.com, still one of the most highly regarded informational sites on the Internet.

Would that Joe Fox (Tom Hanks) and Kathleen Kelly (Meg Ryan) had consulted Levine (or Alice or Delilah) during the initial days of their secretive online courtship. She could have made a few pertinent suggestions to ease the couple’s rocky transition from e-mail flirtation to actual, in-the-flesh love.

“So which did you like better?” I ask, after the show. “You’ve Got Mail or The Shop around the Corner?”

“Shop around the Corner,” she admits. “Don’t you think it was much more romantic? But tonight’s movie did have a lot of good things to say about Internet relationships.

“One of the best things it does,” she goes on, “is to make cybersex seem more or less normal. By cybersex I mean the entire spectrum of sexual relationships on the Internet, from actual mutual sexual experiences, to all the sex information available on the Web, to online friendships and even lasting love. I like the way the movie shows that two normal, attractive, professional people can go online and develop a decent relationship. Because you wouldn’t believe how many people think that all you’ll meet on the Internet are geeks and losers and strange, dangerous people.

“Or that we’re all teenagers, ” she shudders. “The truth is, most users of the online chat rooms and meeting places are in their 30s, 40s, or 50s.”

“Well, of course,” Levine laughs. “And I’m not saying that there aren’t losers and geeks on the Internet. There are. But there are also people like Joe Fox and Kathleen Kelly.”

ANOTHER THING Levine feels was demonstrated especially well was the sense of excitement that can come from an online correspondence. Joe and Kathleen each demonstrate a wild, unchecked glee, a breathless anticipation every time they turn on their computers and hear that bubbly computer-voice announce, “You’ve Got Mail.”

“Actually,” Levine remarks with a laugh, “the little voice doesn’t say, ‘You’ve got mail.’ It says, ‘You have mail.’ That was weird. I want to point that out in the interest of accuracy.

“But the movie did capture that sense of mystery and excitement you feel, getting that e-mail from someone you’ve been flirting with but don’t really know,” she says. “The idea that, sometimes, waiting for that e-mail to show up in your box is the most exciting part of your day. You can’t wait to come home. Then you sit in front of your computer and you turn it on and–you have mail!

“The anticipation can make it great,” she laughs.

“You know the other thing that was weird?” Levine continues. “Their relationship didn’t escalate the way these relationships usually do–from e-mail, to telephone, to that first meeting in person. In the movie they just set up the meeting by e-mail. But I’ve never seen an e-mail relationship go directly from an online correspondence to a meeting.

“There’s always the phone in between,” she insists. “For very good reasons. For one thing, it allows you to make sure what gender the other person is.”

“This sounds important,” I agree. “I take it there have been cases of gender misrepresentation during some online relationships?”

“Ha. I could tell you stories,” she says with a nod. “But basically, the best thing about this movie is that it shows what a positive and healthy and wonderful force the Internet can be in bringing people together who would otherwise never meet.”

“So this wasn’t a fantasy?” I reply. “People are going to see this and believe that the possibility does exist of finding a relationship online like the one Tom Hanks and Meg Ryan find. You’re telling me it really happens?”