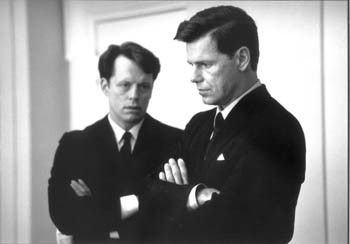 “FOR YEARS and years, we lived under this constant threat of nuclear annihilation, a threat so enormous and so devastating, it made it hard to seriously bank on ever having a future. It made it hard to plan for long-term goals. Then the Cold War ended.”

Ken Sitz–clutching a steaming hotdog in one hand, all but bouncing in his wooden chair–delivers these verbal bon mots in a wistful tone of voice that just barely conceals a sharp, nostalgic longing. “When you walk around believing the world might end tomorrow, it makes life interesting. Everything becomes precious, if a little futile. I really don’t think we should easily give that up. I think we should try to hold on to a little bit of that.”

Facing Sitz across his cozy Los Angeles Hills living room are Bill Geerhart and Curtis Samson, similarly armed with frankfurters, similarly nostalgic for those bad old, scary-ass Cold War days. This mood has been heightened by the new film Thirteen Days, which we’ve all just returned from seeing.

Sitz, Geerhart, and Samson all liked the posters–but they loved the movie.

It’s true. Since April of 1999, these three gentlemen have calmly and quietly built Conelrad.com, a very cool, very eerie website that is keenly devoted to “all things atomic.” The site takes its name from the old national Emergency Broadcasting System outlet that operated during the early parts of the Cold War and would have spread the word should our corner of the planet have come under nuclear attack.

The website is as packed with kitschy facts and images as a well-stocked fallout shelter, with reviews of the top bomb-themed movies–the Conelrad 100–and Cold War record albums. Then there are the eye-opening reports on the proper way to “duck and cover” and the effects of radiation on real-life witnesses of U.S. nuclear tests.

Sitz, a Web producer for Lazerfish.com, is a pop-music historian whose collection was explored in RE/Search Publications’ Incredibly Strange Music, Vol. 2. Geerhart is an L.A.-based documentarian, and Samson–a retired Air Force captain and the trio’s only actual Cold War military veteran–is an avid collector of nuclear-pulp novels.

For the record, Sitz and Samson were in elementary school during the actual Cuban Missile Crisis. Geerhart wasn’t born yet.

“I remember it pretty well,” says Samson. “I was at school, and they sent us home. It was like the world’s spookiest holiday.”

“I remember going outside to the playground,” adds Sitz, “trying to imagine the playground gone, wiped out by a bomb. I was overwhelmed at the thought that something as big as the playground could be wiped away.”

“During the credits of 13 Days,” I say to Sitz, “you seemed to recognize the person credited with nuclear effects.”

“The nuclear-porn guy. He’s famous for his footage of nuclear tests,” explains Sitz. “Years ago, he somehow cornered the market on all this footage that was being kept in a secret bunker in the Hollywood Hills. Now whenever a producer needs an atomic bomb explosion, they go to Kuran. He’s built quite a market for it.”

“The guy has archived and processed all this footage,” adds Samson. “He’s even released a few compilation tapes of random atomic tests.”

“But none of them are ever done in any meaningful contexts,” says Sitz, “so it’s a lot like nuclear pornography. Just a bunch of big bombs going off.”

“Some of the images are pretty striking, though,” remarks Geerhart. “Remember that bizarre Chinese test, where they have gas masks on all the horses?” Everyone nods. “Now, there’s an image that sticks with you.”

In regard to the movie’s description of events during the Cuban Missile Crisis, the Conelrad boys admit they were, literally, on the edge of their seats at times.

“I liked that the crisis was told entirely from the U.S. point of view,” Sitz tells us. “It never showed what the Russians were doing or thinking, which is precisely the way to tell this story, since the whole crisis escalated, in part, because we were operating under a severe lack of information. It was almost catastrophic.”

“Over 10 years ago,” he continues, “after the Berlin Wall came down, there was a big summit with a lot of the U.S. and Russian people who’d been directly involved in the Cuban crisis. They got together in Washington and talked about what had happened, comparing notes, putting the pieces together, realizing how paranoia and misinformation fueled the escalation. At one point they were all sitting there going, ‘Shit! It was even closer than we’d thought.’ ”

“The world really had been on the brink of destruction.”

A long pause follows. Everyone sits silently, reveling in the tasty terror of that last thought.

“People ask us why we’re so into atomic culture,” says Geerhart at last. “I think the appeal is, everyone likes a secret, and the Cold War era was chock full of really bizarre secrets that are only now coming to light.”

“I thinks it’s deeper,” concludes Sitz. “I think we know we’re too complacent, that our security is illusory. So when we dig into this stuff, or see a movie like 13 Days, we can look up at the sky and say, ‘Wow. We are so lucky to be alive.’ ”