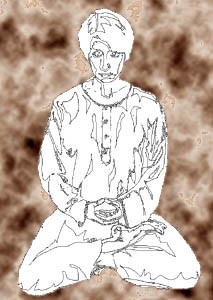 Wellness is all in your head

WHO THE HELL do you think you are? Sort through the media’s images of who you should be. Measure them against the self that some say is determined by genetic makeup. Cross-reference with the self your parents raised you to be. And if you can’t stand your concocted self, you can always adopt a Prozac-induced persona.

Or, you can ask Richard DeGrandpre, Ph.D., visiting assisting professor of psychology at St. Michael’s College, Burlington, Vt., and prolific author on the subjects of “health and self.” His forthcoming book, The Changeable Self, co-written with well-published psychologist Stanton Peele, challenges the recent wave of behavioral genetic research and champions mind over gray matter.

DeGrandpre’s answer is this: You are who you think you are. Stop blaming your genes, your Calvin Klein jeans, your inner child, and your dysfunctional parents. Stop consoling ills by popping pills. In other words, get a hold of yourself.

“It appears that as the world is becoming a more stressful, impersonal, and harsh place,” explains the 32-year-old graduate of the University of Vermont, “people are more willing to give up on their sense of self-determination and freedom, embracing instead crippling ideas about how childhood or genetic history predetermines one’s future.”

In DeGrandpre’s view, the age-old question of free will vs. fate is best addressed by social critics, not maddening scientists. Biology lets us off the hook with the “my-genes-made-me-do-it” paradigm. Pop psychology provides quick fixes for broken psyches. But sociology holds society accountable. What we have on our hands is a cultural tragedy, he posits, and what we need is to change our minds about what’s important.

DeGrandpre doesn’t mean to sound like a motivational speaker, a spiritual guru, or a patronizing shrink; he simply intends to promote genuine well-being over the guise of well-becoming. His model is that hopelessness is a modern construct fueled by the capitalist rat race.

In fact, he elucidates, it’s only the so-called advanced societies that suffer from suicide, depression, and like-minded problems–“the inevitable by-products of an inward, materialistic culture,” he says. “If you’re caught up in keeping up with the Joneses, there is no solution. You can never achieve the romanticized version of chronic bliss. It will always elude you.”

But people who simplify their lives, he adds, find that they gain a lot by losing a lot. It’s the pursuit of happiness that has made us unhappy. We’re miserable because there’s no finish line. The corporate American mandate is to consume and to possess, which sends vastly conflicting messages to our heads. Our society is now marked by dichotomous diseases: We weigh in with the highest incidence of both anorexia and obesity.

DeGrandpre believes that we’re hurdling toward a giant national nervous breakdown. The trend almost reversed itself in the ’60s when dropping out spawned new social orders like communal living. But the ’90s and the present seem to be about opting out entirely. This is a decade of self-indulgent angst where body piercing is perceived as the alternative and amphetamines are the panacea. This is a time when genes are the bad guy. This is a place where money talks and we listen to Prozac. This is your brain on hiatus.

Feeling that we’re losing our minds results from the extreme messages we receive. “There’s a tendency to polarize the narcissistic self from the socially oriented self. It has become a question of inwardness versus outwardness. Strike a balance between selfishness and selflessness,” DeGrandpre recommends. “Give up the roller-coaster ride of ambition to recover a mediated existence.”

THE ULTIMATE goal should be to change society, not individual perceptions. We can’t all be well until the trappings that make us sick are removed. A great deal of what Western medicine calls developmental problems are really social diseases, according to DeGrandpre, who dismisses the rise of attention deficit disorder as “a wholesale psychiatric myth.”

“There always have been a few excessively hyperactive kids, but what I’m saying is that one of the behavioral by-products of this high-saturation population are new inattentive and hyperactive children,” he explains. “In a classroom setting where things don’t go that fast, students fall into self-stimulation behaviors. Classrooms are out of date with high-speed society. But the answer is to slow down the world, not speed up the classroom.”

Basically, we’re unable to feel at home with ourselves when external stimulation shuts down. For evidence, DeGrandpre contrasts our current sensory-laden lifestyles with those at the turn of the century, when the debut of silent movies actually made people nauseous. Today, even billion-dollar thrillers can be boring. Kicks just keep getting harder to find.

Certainly part of the problem has been “prosthetic solutions.” Give a drug to solve a need, which creates further need. “Ritalin use has increased 2.5 times since 1995,” DeGrandpre points out. “Pretty soon all parents will want their kids on it, which is far more likely to create an intolerance of difference, rather than improved childhood well-being. With more prosthetics available, it’s becoming more acceptable to ridicule exceptional people than to fight for social justice.”

A one-dimensional Cosmetic Self–characterized by high-tech, super-duper treatments–is emerging. We’re nipping and tucking, buying and selling, and kicking and screaming our way to becoming just like everyone else.

But the obstacles are external and eternal. The world just isn’t worth being well for, so we’ve found a number of reasons to justify our perceived shortcomings, and an equal number of ways to overcompensate.

What’s most disturbing to DeGrandpre is this very shift from the social community to the individualized psychological society that breeds marketable solutions like drugs and short-term fixes. “Corporate America doesn’t make a buck on social change. The message is, if it can’t be sold, then it’s not an option for change,” he laments. “It seems we can’t have a moral society and capitalist one at the same time.”

Apparently I’m OK, you’re OK, but the world isn’t. In the classroom, DeGrandpre tries to emphasize the power and influence of social and historical forces on thought and action. “There is nothing inside you that needs to be searched for and fixed,” he counsels. “The depth metaphor of inwardness sets the stage for current ideas like the wounded inner child and the gene myth.”

The truth is that we need to be more co-dependent–not, as one bestselling self-help book advised, Co-dependent No More. The only way out of this self-absorbed black hole, warns DeGrandpre, is to be sympathetic and selfless. Real mental health will come from reorganizing our lives around a responsible agenda. People who sacrifice their own personal gain for the improvement of others should be the new role models.

“It doesn’t matter whether free will or fate prevails once you believe that you’re not in control,” DeGrandpre urges. “The hundreds of stories we hear about people overcoming obstacles tell us that genetics and childhood as prophecy are moot when we take responsibility for ourselves.”

DeGrandpre isn’t advocating a “pull yourself up by your bootstraps” work ethic. He is instead lobbying for humans to literally pull together. And only then will we be well.