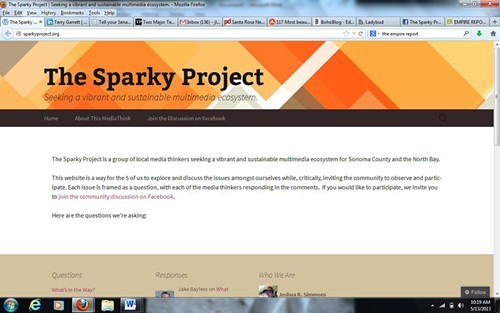 Local group asking some tough questions about journalism and its role

A media interest group has recently formed in Sonoma County. They have dubbed themselves The Sparky Project, a “group of local media thinkers seeking a vibrant and sustainable multimedia ecosystem for Sonoma County and the North Bay,” according to the group’s website.

In its infancy, the site is a kind of forum for the members of the group: Jake Bayless, who runs Empire Report; Joshua Simmons, web developer; Kerry Rego, social media consultant; Gretchen Giles, writer, editor (and former Bohemian editor); and Terry Garrett, Leadership Developer at Sonoma County GoLocal. So far, members have hashed out questions about local media. The public can view their discussions and, if they want to participate, join the group’s Facebook page to enter the discussion.

Some of the questions the Sparky Project has asked so far are about journalism and its potential issues:

What is news, anyway? (And who should decide?)
What information do people need to conduct their lives?
In order to reach its highest good, does a democratic state require a well-informed citizenry?

Giles responded to the question about what’s news, and who should decide: “If the gate has been unlocked and anyone can post items at any time under the guise of ‘news,’ how do we sort out the necessary from the unnecessary without gross error?”

An excellent question, and one that needs a lot more discussion. It’s laudable for this group to have formed, and to be brave enough to ask these questions in a public way. What I’m unsure of is where this is going and what the end result will be. Whatever happens, though, the group was founded by people who are certainly well-versed in the media—it should be interesting to see what comes to fruition.