There Are Already 100 People In Line For Pliny the Younger at Russian River Brewing Co. 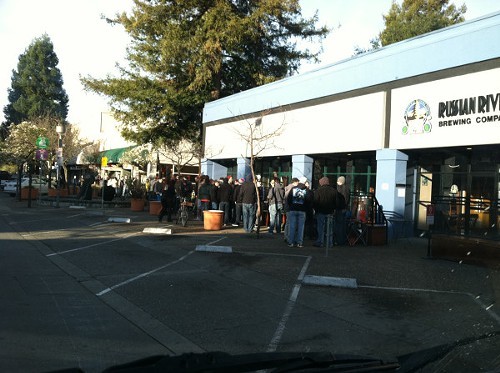 Santa Rosa’s Russian River Brewing Co. releases its 2012 Pliny the Younger today at 11am, and already, two hours before the opening pour, there are 100 people in line.

Via Boho pal Jake Bayless comes the photo above, showing that indeed, rabid passion for the consistently top-rated beer has not waned. Especially since this is merely a case of “firsties”—the judicious way in which Russian River rolls out the beer over the next two weeks, everyone (locally, at least) should be able to glug their share. From their site:

Younger will be served in a 10 ounce glass for the same price as last year and the year before- still a good deal! As you probably already know, there will be no growlers or bottles, as usual. . .

There will be a certain number of kegs allotted each day for 14 days, wrapping up 2 weeks of Younger on February 16th. . . . Last year we had a line out front everyday for 2 solid weeks, rain or shine! On the weekends (particularly the first weekend) the wait was up to 3 hours. And sometimes you could walk right in.

Kudos to RRBC for enacting measures that detract reselling the beer on eBay—the only way to take the beer off-site is in your stomach. Everyone else, get on down there in the next couple weeks! But take your time. After all, it sucks to be last in line.