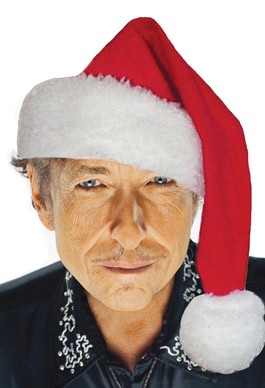 More clunkers than classics among this year's holiday releases

It’s gotta be a joke.

That seems to be the universal reaction to Christmas in the Heart, the new, unexpected seasonal CD from—wait for it—Bob Dylan.

Alas, no. There’s nothing funny, new, original or even celebrative among the thoroughly uninspired album of traditional hymns and tired wintertime standards, which even includes the over-roasted chestnut “The Christmas Song.” Just Dylan’s road-ravaged croak careening through a series of excruciatingly tasteful arrangements, randomly substituting a word here and a note there without the slightest hint of irony or, for that matter, enthusiasm.

The few tolerable moments—an almost suitable “Christmas Blues,” and “Must Be Santa” as a Tex-Mex two-step—are more than offset by a plethora of painful ballads. Dylan crooning the likes of “I’ll Be Home for Christmas” and “Silver Bells” evokes the Ghost of Christmas Past-His-Prime, and the way he growls “Do You Hear What I Hear” or “O Little Town of Bethlehem” can only be described as “extraordinary” renditions.

To be charitable, we can credit the ever-unpredictable Dylan with doing something that few fans ever thought he could achieve: recording an album that makes Self Portrait sound coherent and accomplished by comparison.

Among Dylan’s contemporaries, the holiday season has become, sadly, an occasion for grasping at the shreds of long-faded relevance, an opportunity to milk one more purchase from a fan base still clinging to memories even older than their children. Thus we have “new” Christmas releases from such middle-of-the-road stalwarts as Neil Diamond (his third), Michael McDonald (number two), Charlie Daniels (third) and Barry Man-I-Loathe, who has churned out a hard-to-imagine fourth seasonal CD. They are all, I’m sure, as predictable as a late sunrise on solstice, and nowhere near as appealing. If you love ’em, buy ’em. Just don’t make me listen to them.

Speaking of solstice, the other high-profile seasonal release this year comes from Sting, whose artfully austere If on a Winter’s Night etches odes to its titular subject with scant acknowledgement of any holidays. Deploying spare, acoustic arrangements (think harp, lute, bohdran), the former Police man glides through 15 mostly unfamiliar melodies (only one original) without ever generating enough heat to defrost that rose e’re blooming. Beautiful, but chilly.

Then there’s Rob Halford‘s Winter Songs, in which the Judas Priest frontman shows he can be, well, almost sentimental. Almost. After the opening “Get into the Spirit”—more a command than an invitation—the power-chorded carols pretty much play it, er, straight, even injecting a surprising degree of majesty into the closing “O Come All Ye Faithful.” Still, it’s hard to imagine this one finding much of a crossover fan base.

For those whose affection for ’60s and ’70s soul and funk runs deeper than the usual suspects, the compilation ‘In the Christmas Groove’ is an off-the-beaten-track collection of tracks from low-profile acts, often B-sides from forgotten singles. Some borrowed riffs may sound familiar, but few of the songs will. If any were destined for memorable longevity, it would have happened well before now. Meanwhile, the repackaging wizards at Motown have—for, oh, no particular reason—seen fit to reissue a Jackson 5 holiday collection this year, along with a more generalized label-wide anthology. At least they’ve got a deep stash of worthy material to work with.

As is often the case, there is more joy and warmth to be found among the season’s less-heralded releases, starting with the Putumayo Records compilation, ‘A Family Christmas.’ The international aggregator’s fourth holiday set is presented as a kids’ disc, which explains the atypical dominance of North American and British acts, but the fresh, mostly acoustic performances have a near-universal appeal.

My personal favorite this year is Carla’s Christmas Carols, with each track elegantly arranged for brass quintet with piano, bass and occasional chimes and celeste by American composer Carla Bley. With contrapuntal riffing among the brass choir that balances the decidedly modern harmonic vocabulary grafted onto such enduring melodies as “Away in a Manger,” “Jingle Bells,” “O Holy Night” and, yes, even the inescapable ode “The Christmas Song,” Bley finds a graceful common ground between jazz and the classical traditions of two centuries, just right for making spirits bright.