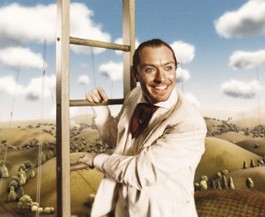 The possibility of Avatar’s success couldn’t stop a hell rant by Bruno Ganz’s Der Fanboy Fuhrer, dubbed in once again on YouTube by yet another anonymous prankster. In the spoof, Hitler puts it best: “James Cameron should have left the remake of Ferngully: The Last Rainforest to Lucas! It’s The Clone Wars: Thundercats!” Only previews—and the profile articles Cameron has so generously allowed—give clues to whether ‘Avatar’ (Dec. 18) will be titanic-sized or a resounding flop.

What we do know is that it’s a sci-fi parable of planet invasion, heavy with colonialist guilt. Sam Worthington is a crippled warrior using technology to inhabit one of the nine-foot-tall, azure-skinned, giraffe-eared, technically unsophisticated members of a faraway planet. IMAX and Real3D will add something to the impact of the CGI that’s impossible to judge from computer-sized screens.

Terry Gilliam’s ‘The Imaginarium of Dr. Parnassus’ doesn’t have a firm release date locally, but it’s playing in the British commonwealth already. Tom Waits is Satan, dressed a bit like Neville Chamberlain, and Gilliam’s recovery from the loss of his star, the late Heath Ledger, through a prisming of the character into several other name movie stars is clever in this modern-day Faustian tale with Johnny Depp, Jude Law, Christopher Plummer and Colin Farrell. The plot, contrasting deep wells of fantasy with the desolation and pollution of London, echoes Ray Bradbury and The Circus of Dr. Lao.

Speaking of London, there’ll be so much suffering in the other theaters that I think we’re all entitled to something a little emotionally restrained: Robert Downey as ‘Sherlock Holmes’ (Dec. 25), even if we’re not too jazzed by director Guy Ritchie’s urge to make our hero “accessible”—i.e., faster and more violent. Rachel McAdams is the troublesome Irene Adler, Jude Law is Watson, and the reliable Mark Strong plays the disreputable Lord Blackwood, a peer with plans for the British Empire. Moriarity (Brad Pitt) is in it for a moment, too, in preparation for a sequel that’s already underway.

And as the junior version of Holmes’ sovereign, Emily Blunt plays ‘The Young Victoria’ (Dec. 18), with Rupert Friend as Albert, Jim Broadbent as the sailor-king William IV, Julian Glover as Wellington and so forth. People love it when you elbow them in the ribs and tell historical stories about the personages when they’re trying to look at the gowns.

The chill season is warmed with ‘Nine’ (Dec. 18), featuring Penelope Cruz honeyed up in lingerie; it’s Rob (Chicago) Marshall’s musical version of Fellini’s 8 1/2, with Daniel Day Lewis in the Mastroianni part. Sophia Loren is Lewis’ mother, just one of the women pulling the bedeviled director in separate directions. Nicole Kidman is also in it, because what’s a winter without icicles?

And on the subject of fateful icicles, ‘The Lovely Bones’ (Dec. 11), Alice Sebold’s harrowing, tear-wringing and seemingly unfilmable bestseller finally makes it out into screen after years of false starts. Peter (Lord of the Rings) Jackson envisions the candied heaven of a vanished murdered girl (Saoirse Ronan), with Rachel Weisz as her inconsolable mother and new music by Brian Eno.

’35 Shots of Rum’ (Dec. 18) is Claire Denis’ new tantalizer, about the connections between a loose group of Franco-Africans in Paris. ‘The Private Lives of Pippa Lee’ (Dec. 11) features Robin Wright Penn as the distracted wife of a much older plutocrat (Alan Arkin); the director is the chronically interesting Rebecca Miller (The Ballad of Jack and Rose).

From Christopher Isherwood’s 1964 novel ‘A Single Man’ comes the screen version starring Colin Firth as a Southern California professor recovering from the death of his male lover during the JFK years. ‘It’s Complicated‘ (Dec. 25) finds director Nancy Meyers of the satisfying Something’s Gotta Give leading a love triangle with Alec Baldwin and Steve Martin playing monkey-in-the-middle with Meryl Streep.

‘Up in the Air’ (Dec. 25) is the new film by Jason Reitman, with George Clooney as a layoff specialist who never considered hiring a wife and kids. Anna Kendrick co-stars; she’s best known for the intrepid supporting work she does in the Twilight movies as Bella’s gabby, dippy gal-pal. ‘Invictus’ (Dec. 11), the new Clint Eastwood movie, parallels the story of Nelson Mandela with the Rugby World Cup of 1995 held in race-torn South Africa, with Matt Damon as an Afrikaner player. Because of the rugby theme, one guesses that the moral of the story is that black and white bleed the same color. William Earnest Henley’s bad poem gives us the odd title.

For children, there’s ‘Alvin and the Chipmunks: The Squeakquel‘ (Dec. 23), and Disney’s make-or-break attempt to revive classic flat animation, ‘The Princess and the Frog‘ (Dec. 11), a Creole-themed fairy tale with voodoo, and R&B songs by Randy Newman. A medium seemingly headed for extinction at the hands of CGI makes it to the end of this tumult-ridden decade. This may be the best news of the end of the year.