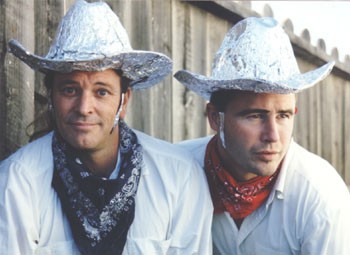 Is it music, theater, or demented performance art? Whatever it is, the indescribable Towne Dandies are having a lot of fun doing it.

Some things are easy. Some things are hard. Engineering a tunnel between two mid-Atlantic islands is hard. Splitting an atom is hard. Getting Arnold Schwarzenegger to stop making movies is hard. But such endeavors are a paltry piece of cake when compared to the barely surmountable problem at hand: describing what it is that the Towne Dandies do.

Formed several years back by former St. Helena resident Geoff Ellsworth, the Towne Dandies are at first glance a strikingly freeform music group–if you can even call it a group. The Dandies tend to fluctuate in terms of their personnel. Currently peopled by Ellsworth, Jim Pantaleo, Brian Clothier, and Mike Perez, the band is purposefully elastic, routinely adding or shedding members and frequently reducing itself down to just . . . Ellsworth.

All alone. Onstage. Doing whatever a Towne Dandy does. Even he cannot adequately describe the Towne Dandies–he often uses the term “cyber-Western” to describe his act, but that only creates more questions–and experiences some difficulty in explaining the strange appeal his group clearly has among its numerous loyal fans, locally and abroad. “We bring people together by separating them,” Ellsworth says. “Something like that. I don’t really know.”

Recognizing that this description is perhaps not that much help, Ellsworth laughs and tries another approach.

“The Towne Dandies are music as art project,” says Ellsworth, who is in fact an artist, a professional painter of portraits and landscapes. And while he is also an accomplished musician and songwriter, he tends to think of himself primarily as an artist and to regard his eclectic exertions with the Towne Dandies as performance art. “And with all art projects,” he says, “they always take a turn on you. You start out thinking you’re making one thing, but circumstances take you into different directions. So with every one of our Towne Dandies shows, I always just stay open to the possibilities.”

Possible interpretation: This is one eclectic act.

Which pretty much happens to be true.

Ellsworth is speaking by cell phone from San Diego, where he’s been recording the latest TD album. It is somewhat instructive that he refers to the project not as a CD but as a soundtrack. Anyone who’s seen the Dandies in action will be able to relate. The typical TD show is more like a play–a bizarre, funny, and outrageously surreal play–than any concert by any band you’re likely to catch in a bar or club, which is where they usually tend to perform. Most of their shows are themed stories with songs, featuring costumes, props, characters and scripted dialogue tied in around the music, itself a ridiculously hard thing to describe.

Currently, the Dandies are performing two different shows. The first, Stay Cowboy, follows the adventures of a punk-singing cowboy crew who–much like the Knights of the Round Table–hit the trail in search of the legendary Big Belt Buckle, a quest that takes them through barroom brawls, barbershops, Indian casinos, and bad hitchhiking experiences on their way to fame, fortune, and rodeo glory.

The songs, featured on the quirky “soundtrack” titled My First Stampede (BE2 Records), are saddled with affectionately whacked-out lyrics and unexpected where-the-hell-did-that-come-from musical influences. In one odd little track, “Manly Footwear,” the Dandies talk about cowboy boots through arcane historical references set to a steadily driving beat and a guitar-heavy, David Bowie-esque, Spiders-from-Mars melody–if you can call it that–that occasionally sounds like a deranged rock-and-roll chant. “Whether marching to the front / or just coming home for lunch / Manly footwear reigns supreme / and Roman sandals won’t be seen / ‘Cause leather boots are still the style for manly footwear.”

The other Dandies show is That’s What Pirates Gotta Do, which puts extra emphasis on the in-concert props, only with pirate costumes instead of hats and spurs.

Asked how this all came about, Ellsworth tells of the time he watched in awe while a friend’s young son attempted to tell a story, illustrating his adolescent epic by grabbing different toys and spare objects from his room, incorporating each one into his act in humorous ways.

“This kid–he didn’t care what anybody thought,” Ellsworth says. “He was just trying to tell a story anyway he could. It was hilarious.” Shortly thereafter, Ellsworth began infusing his own musical shows with more theatrical elements–props, costumes, characters, even a plot and a story–using the songs to move the drama along rather than just performing a list of tunes.

About those tunes: like everything else the Towne Dandies do, the style of music seems to defy description. It incorporates elements of Western cowboy ballads, punk anthems, techno music, and even French opera.

“I like to think of it as folk music,” says Ellsworth. “You know, it comes from folks, it comes from people, right? I’m a person. It’s music we make up from spare parts, by whatever means available. So it is homespun; it’s grass roots.”

After a moment’s pause, Ellsworth thinks up yet another way to describe it. “If you were in Russia,” he says, “and you just had to make some music, and you had to make it using whatever tools you have–kind of in a postapocalyptic way–you’d say, ‘Hey! I’ve got a couple of sticks and a garbage can–let’s make some rock and roll!’ It’s kind of like that. We’re sitting around and someone says, ‘Hey, we’ve got this Casio sitting here–let’s write a song. Or ‘I hear there’s a great new guitarist in town. Let’s see if he’s willing to come in and put something down.'”

Though the Dandies music is available over their website (www.townedandies .com), the best way to experience them is live, where the full effect can be felt. Towne Dandies shows attracts a number of experienced fans, but there are always those in the audience utterly unprepared for the show.

“Sometimes people aren’t quite sure what’s going on,” he allows. “Usually people are either laughing or staring at us in mute horror–which I think is pretty great. Whenever I look out at the audience, I never know what they’re thinking. Sometimes I’ll look out at a crowd and think, ‘Oh shit. Nobody’s getting this. Nobody’s responding.’ And then it turns out that they were just . . . watching, but not giving out any emotion. But it turns out that they are very into the show, and they tell us that with their applause at the end.”

Sometimes, of course, they play a venue where the audience is a little bit too unprepared for the Towne Dandies.

“We’ve been in rock clubs trying to do our thing,” Ellsworth says, “and we know it’s the kind of performance that doesn’t really fit with what those people are used to seeing and hearing. And that can cause some, uh, difficulties.”

“Yeah. You know,” he laughs. “On occasion we’re threatened with getting our asses kicked, etcetera. But that’s OK, because every time we play we also get at least a few new people coming up to us saying, ‘Hey, I really liked that. Whatever that was.'”

So is there a future for a band that cannot be described, that mixes musical styles that should not be mixed, that routinely performs in concert playing other people–that sometimes dresses up as pirates?

Ellsworth doesn’t know that either.

“Who knows?” he laughs. “I could end up as the host of a really cool children’s show on TV. That may be what I’m best suited for.”

Not that he’s planning to give up any time soon. He and his band mates are having too much fun to quit.

“I’m going to keep doing what I think I’m good at, what makes me happy to be doing,” he says. “And if the direction I’m going feels like a good direction, I’ll keep following that path. Hopefully, in the future, it will all congeal into something–and hey, maybe it will finally begin to make sense.”