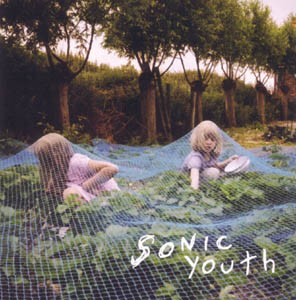 Thank you, Sonic Youth. Your new album is not lame but fresh and exciting, and all is right with the world. Ever since 1995’s Washing Machine, the world’s most high-profile art rockers have been coasting down the low arc of a yawn, with each successive album growing fuzzier in focus and less electrifying to the senses. These weren’t bad albums, they just weren’t as great as we knew they could be. Meandering without direction or juicy hooks, the songs slid by, their dissonant subtle moments stretched too thin to create the compelling sound-picture Sonic Youth once so artfully painted.

The Sonic Youth of Murray Street is the new school, more adult and nuanced band they have become ever since the off-kilter distort-o-rama of Experimental Jet Set, Trash and No Star. This pleases some and displeases others, especially indolent critics who never liked Sonic Youth in the first place, accusing them of being indulgent, overly cerebral avant-guard poseurs.

But therein lies the catch. Sonic Youth’s music isn’t made for thinking and dryly dissecting; it’s made for hearing and feeling. Of course people who don’t dig distortion and feedback and who can’t shut up and just listen won’t like it. But if you do and you can, wet down your lips, because Murray Street is a very good kisser.

Murray Street has no instantly apparent anthem, no obvious MTV pick, and is probably not destined to enter the hearts of passive Sonic Youth listeners. Fine. What Murray Street boasts is a sort of counterdimensional, slow motion, blissed-out blossoming of faraway chiming guitars and a small cacophony of churning alternate tunings that has been years in the making. Taking all of the antimelody noise-making experience they have garnered in nearly two decades of shredding unexplored territory, Sonic Youth has finally perfected sounding big by going smaller.

Murray Street is gossamer-spellbinding, like having the blue netting on the cover (one of the two little girls on the cover is Coco, the daughter of band mates Kim Gordon and Thurston Moore) waft down over you for 45 minutes, blanketing your perceptions and hazing out your brain with all the lavish laziness of a summer afternoon spent swinging stoned in a backyard hammock under green leaves and hovering bumblebees. The seven tracks are well-defined songs, not just collections of pretty bits and pieces (a fate that befell much of 2000’s NYC Ghosts & Flowers).

Lee Renaldo’s “Karen Revisited” buzzes with the vein of New York City diffidence that typically runs through Renaldo’s songs, with his distinctively loping vocal rhythm swirling with momentum. And “Plastic Sun,” Kim Gordon’s lone vocal track, scoots along with the weird schoolgirl taunting (“Plastic girl with plastic hair / plastic eyes with plastic stare / I hate you and your bitchy friends / I hate you and it never ends”) that 40-plus Kim Gordon can still pull off.

Sonic Youth may have grown older, but instead of old and stuffy, they sound wiser. Murray Street marks longtime producer and collaborator Jim O’Rourke’s official spot in the band’s lineup, and with five members now, the glorious walls of layered feedback are sturdier, fuller, more solid–when the whole sonic wave crests, it falls not into a chaotic collapse of white noise but into an intricate swirl of sound. “Radical Adults Lick Godhead Style” even features horns, played with such a frayed drone that they meld naturally with the sunburst of guitar feedback.

Whether all of the band’s audible injection of energy was a result of O’Rourke’s presence in the band or Sept. 11’s fallout, Murray Street is understated Sonic Youth at the top of their game, as powerful as ever from mellowed adults with crow’s feet. The wonderful thing is that even though Murray Street never totally rocks out, you don’t miss it. If that’s what Sonic Youth have been striving for with all of their soporific late ’90s albums up to this point, they’ve finally done it. Murray Street stands on its own without having to rely on dynamic fireworks or superhooks to keep it that way. Even though Sonic Youth will always be the coolest of the kool, it’s rewarding to hear an album that certifies it.