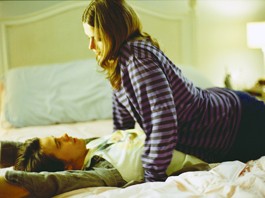 Cevin Cathell has an interesting theory about movies.

“I think I can say with some confidence,” she remarks, “that films have replaced novels and short stories as our primary form of storytelling in this society.”

Credit (or blame) the constantly expanding accessibility and relative affordability of modern cinematic media. Novels, stories, poems, letters—they all took the place of the ancient story told ’round the campfire and the traveling troubadour with a head full of folktales. And now, a digital camera and a suite of editing tools have replaced, or at least partially replaced, the written word as the reigning force in the sharing of stories.

“The whole idea of words on a paper—as wonderful and important as that is—is gradually being shoved over by the visual mediums,” says Cathell, the programming director of the Sonoma International Film Festival (previously known as the Sonoma Valley Film Festival, or Cinema Epicuria, this year running April 1–5). “The storytellers of our present culture,” she says, moving through the noisy film festival office just two weeks before opening day, “are a new breed of story teller. I’m not the first person to have said this, but films are the folktales of the 21st century.”

And film festivals, especially regional ones like the Mill Valley Film Festival, the Sebastopol Documentary Festival, the Tiburon International Film Festival and the Sonoma International Film Festival, have become the great big fire around which the villagers gather. This year’s SIFF, under the leadership of Louisa Percudani (replacing outgoing executive director Marc Lohrmer), will be featuring a total of 65 cinematic stories culled from hundreds of international submissions. As one of the folks responsible for doing that culling, Cathell says that more than anything else, it is the quality of storytelling that she is looking for in choosing which films to include in the festival.

“The number one element that I am looking for is story,” she says. “A movie can have great acting, great directing, great cinematography, great special effects, but if it doesn’t have a great core story, then there is simply no film there.” For Cathell, a “good story” means a tale that speaks to people and enriches them, making them feel something while moving the film’s characters smoothly from beginning to middle to end across invisible threads that are all tied satisfactorily together in the end. Asked to illustrate this notion with examples from this year’s festival, Cathell consults an enormous board listing all of the 2009 offerings.

The first film she mentions is Spooner, starring Matthew Lillard (Scream, Finder’s Fee, Scooby-Doo), the opening-night film at the festival’s popular “lounge” venue in downtown Sonoma (screenings take place in several venues, most within walking distance of each other). Cathell describes Spooner as “a really sweet Office Space.” According to Cathell, Spooner, by director Drake Doremus, works because Doremus, who also wrote the film, knows how to use the plot to take viewers into the sheltered life of its titular character (Lillard), a socially awkward guy still living with his parents at the age of 30, emerging from his cocoon only after meeting the girl of his dreams.

As other examples of exceptional storytelling, Cathell also points to Punching the Clown by Gregori Viens. The winner of the Audience Favorite award at the recent Slamdance Film Festival in Utah, PTC is the tale of a road-weary singer-songwriter, whose songs, like Tom Lehrer’s, are brilliantly comical spoofs on modern society, and who is desperately trying to break into the L.A. music scene. Cathell likes the way the story gradually twists its hero into tighter and tighter knots of well-plotted complication.

Another trait of a good story, Cathell suggests, is innovation. Full Picture, about a Meet the Parents–type weekend made funnier by the depths of notorious scandal the family is trying to hide, is based on a stage play by Jon Bowden, who directs and stars in the film adaptation. According to Cathell, the film tells its story with very few shifts of scene, with a plot moved forward on a wave of expanding dialogue. “Even if you know where it’s all going,” Cathell says, “it’s really all about the ride.” The other element she looks for in a filmed story is a sense of surprise, which defines the Russian-made fantasy Mermaid (“The surprise is how fresh and light it is for a Russian film,” she says), and also the provocatively titled Good Dick, by Scottish-born writer-director-actress Marianna Palka.

“I love that film,” Cathell says, laughing. “What’s so great about it is that it takes what could have been a typical love story about two unusual people, and then it keeps changing the rules, subverting your expectations of what a love story is. It’s brilliant, and lovely, though in a rather disturbing way. That’s the way to describe Good Dick. It’s disturbingly lovely.”

Good Dick‘s Jill-of-all-trades filmmaker Palka, reached by phone at her home in New York, has her own answer to the question of why she tells stories using the medium of film.

“I grew up watching films,” she says, “so I suppose you could say I speak their language. I think someone could make a novel out of Good Dick and I think it would make a really good play, because it’s a good story, but the way I tell stories is through the reality of film.”

The film, about the relationship between a sexually scarred young woman (Palka) and a slightly obsessed video-store clerk (Jason Ritter, son of actor John Ritter), has been called unconventional, but Palka doesn’t see it that way.

“It’s an unconventional love story told in a fairly conventional way,” she laughs. “I’m not trying to figure out a new way to tell stories. I’m trying to tell this story in the best, most satisfying way I can.”

In defining what it is that makes a good story, Palka is very clear.

“I like plot,” she says. “The familiar framework of a plot, it’s a very comforting, effective invention, and I look for films that use that framework effectively. It’s important to think of the history of cinema and the power of cinema. A well-told story can change the world, it can shift the direction of a whole country. I think that, more than anything else, is important to realize when you are making a movie. You have a lot of power, and it’s your responsibility to use that power really well. A story is an extension of your voice, and as a filmmaker, you should use that voice to say something important.”

One of the other titles on Cathell’s big board is The Answer Man, written and directed by John Hindeman. The movie stars Jeff Daniels as the reclusive author of a bestselling book on spirituality called Me and God who happens to be the crankiest, least spiritual guy on the planet. As explained by Hindeman, a San Francisco native, the story is one he’d always conceived of as a film, and feels that it works best told with that art form.

“I’ve wanted to be a director my whole life,” he says. “When I think of any story, I see it in my mind as a screenplay, not as a novel or any other form. I like that filmic storytelling is heavy on dialogue and short on exposition. I like that movies are the marriage of all the art forms. With movies you have all the colors at your disposal—you have light and color and dance and movement and writing and music and photography. All of those tools can be used in telling your story, while in books you just have words. It gives a storyteller a shorthand, if you will, to tell their stories.”

The Answer Man, Hindeman says, is about many things.

“It’s about everyone’s pursuit of and answer to what might be informing our lives,” he says. “It’s about the lack of such answers, it’s about the silliness of New Age psychobabble, it’s about controlling parents and the people who are trying to overcome them.” To Hindeman, the biggest challenge in telling this story was finding a way to treat the subject of spirituality without making a “spiritual” movie. “If I’ve told the story well,” he says, “then this is a movie that should be entertaining to you whether you believe in God or not. A well-told story works because it’s a well-told story.

“A well-told story is a story that delights and surprises you,” he adds. “By surprise, I don’t mean it has to be The Sixth Sense or The Usual Suspects, but I think the expectation it should fulfill is the expectation that it will entertain you. A film, after all is said and done, is really just a story. We forget that because no one is reading it to you, but that’s what it is. In the end, a good story pulls you along, keeps you engaged, and then ends in a way that resolves all of its own issues. You give me that in a movie, and I’m a happy moviegoer!”