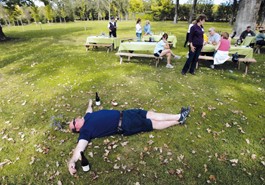 In which our writer bravely endures six gourmet meals, 91 wines and other excruciating luxuries in the name of tourism

It was barely past dawn, and as we lined up along the dirt path leading to the immense acres of fruit waiting to be plucked, our boss barked his orders. It was bone-chillingly cold in the Alexander Valley vineyards of Sonoma County, and the late September fog bit through our light jackets. The dark skies portended rain, and as we curled our frozen fingers into well-worn gloves, Hoot Owl Creek owner Mark Houser laid it all out.

Only ripe grapes were to be gleaned. A professional worker is able to tell if the sugar content is correct simply by the stickiness in his hand. A skilled harvester takes in up to a ton and a half of fruit a day. Houser was personally counting each grape, he said, since the Cabernet being plucked was destined to be $40-a-bottle wine for some of the nation’s best restaurants.

This wasn’t just fruit, he said. This was a future.

He called us back in barely an hour later, shaking his head gravely as he peered into the heavy plastic tubs we’d lugged down the long vineyard rows. We’d crouched, shuffled and hacked furiously with sharp knives, yet we had cleared perhaps 10 pounds each, a weight littered with stems, leaves, raisins and unripe berries. We’d left perfectly good grapes on the vines and dropped more good grapes to rot on the ground.

He sighed. We were worthless.

Then, as the first rays of sun peeked through the clouds, Houser puffed deeply on his cigar and decreed our punishment.

It was back onto the heated, luxury charter bus for us. Off to see the inner workings of barrel and tank rooms at the by-appointment-only Jordan Winery in Alexander Valley, where we would muse at how much work it takes (other people) to run a winery, then undergo an arduous tasting of fine Chardonnay and Cabernet Sauvignon alongside premium Sonoma-crafted cheeses, breads and chocolates.

Next, we would be bussed to the Francis Ford Coppola Rosso & Bianco winery in Geyserville, where we would marvel as trucks dumped grapes into sorting and stemming equipment, mere steps from a very distracting gift shop.

Then, as a reward for our great efforts, we would tuck into an al fresco, white tablecloth lunch of flat-iron steak and lamb chops marinated in Coppola’s Diamond Merlot, grilled fennel sausage homemade by a local artisan purveyor, and roasted farm-fresh vegetables all paired with Coppola’s Director’s Cut Zinfandel.

Welcome to Sonoma County Grape Camp, a two-and-a-half day, hands-on adventure held smack in the middle of harvest season. We were Grape Campers, a group of 31 people who had signed up for an intense immersion into the world of wine.

For someone who’s spent a lot of time around wine (even if mostly on the business end of a glass) and lives across the street from a vineyard, it seemed it would be just a silly romp. We wine country types already know that while imbibing wine is luxurious, the process of getting it from ground to glass can be long, laborious and as detailed as any science project. It isn’t cheap, either—tuition for my trip was $1,500 per person; for the 2009 season, it’s $1,750. What, pay to pick grapes? Um, no, you pay me.

Yet by just its second year of operation, Grape Camp has already proven irresistible to amateur enophiles, with sold-out sessions drawing participants from as close as Nevada and Texas, and as far away as Virginia and New York. Call it culinary tourism or, as I quickly coined, “vintnertainment.” It was educational. And it was a blast. If our days started at dawn in a winery field, they ended past midnight, after elaborate feasting and much drinking at another winery.

“Lots of people have a dream of experiencing a grape harvest,” explained Sonoma County Winegrape Commission marketing vice president and camp director Larry Levine as we rode our bus past such multimillion dollar properties as White Oak, Hanna and Simi wineries. “Here, they can do that in style. It truly is a fantasy camp.”

Fantastic, indeed. Besides sipping many exclusive labels rarely seen outside of private allocations, campers gain entrance into an insider’s-only wine experience that few of the public will ever glimpse. At one point, I glanced up from a dessert of local apple-huckleberry crisp to see that my server was Gina Gallo.

And did I mention much drinking?

Our first glass was lifted at an opening-night wine reception at Vintners Inn, nestled among the Ferrari-Carano vineyards in Santa Rosa. Then we were chauffeured to the private Frei Brothers Reserve Winery in Healdsburg for a sunset feast on a sprawling lawn above the vines. Zazu restaurant’s Duskie Estes and John Stewart presented handcrafted Black Pig salumi and whole spit-roasted pig, paired with 28 different coveted Sonoma County wines.

Stuffed, sleepy and, yes, drunk, we were led back to Vintners Inn to snore the snores of the wicked in a luxury suite.

The next day, after our morning at Hoot Owl, we convened back at the Vintners, where legendary Sonoma chef and cookbook author John Ash conducted a cooking and wine-pairing class. The secret to great wine and food matches? In a nutshell, Ash said, it’s balancing sugar and acid. And the secret to his chilled heirloom tomato soup with a swirl of salsa verde? His finishing instruction: “Drizzle it on your loved one, andtake them.”

The evening found us at Kunde Family Estate in Kenwood, supping on braised short ribs and velvety polenta served deep inside a barrel-aging cave. Drink up, our hosts said, though urging us not to get lost in the catacombs, centered 175 feet below the surface of the 5-million-year-old volcanic lava flows that are the vineyard’s bedrock.

Early the next day, we were back amid the vines at dawn, picking grapes at boutique grower Ulises Valdez’s vineyards in Green Valley. We hand-grafted buds, learned the secrets of irrigation and then moved on to stomping grapes at the Valdez Family Winery warehouse in Santa Rosa, where we turned sticky waltzes through a soggy slosh of Syrah. As we danced, we drank—our first glass of the day at 10am.

For one second-time Grape Camper from Sacramento, it was all almost too much. She’d smuggled out an open bottle of Syrah, and chugging it on the bus to our next destination, shrieked, “I already can’t wait for next year!”

The afternoon found us lolling at Richard’s Grove & Saralee’s Vineyard in Windsor, sprawled on a lush, green lawn for a picnic lunch of Bellwether Farms fromage blanc torta and tri-tip sandwiches from Healdsburg’s Relish Culinary Adventures. There, we learned the apparent effortlessness of founding an international goat cheesery: Bellwether owner Cindy Callahan shared that she had never seen a live sheep, but purchased 10 ewes and a ram to graze pastures, and by happenstance ended up with the delicacy cherished by Berkeley’s famed Chez Panisse, and now, the world.

We weren’t done quaffing, either. Next was a Champagne and hors d’oeuvres “graduation” at John Ash & Co. restaurant in Santa Rosa, followed by an “ultimate” Pinot Noir dinner personally hosted by some of Sonoma County’s most exclusive wineries, including Flowers Vineyard & Winery of Cazadero, and Dutton-Goldfield of the Russian River Valley.

A near-endless stream of Pinot was poured alongside Sonoma specialties such as tea-smoked duck breast with goat cheese croutons, pan-fried California sturgeon on lentils and roasted venison loin with fig gastrique.

As we ate, guest vintner Tom Hinde raised a glass of his Flowers Andreen-Gale 2005 Pinot Noir, and said, “We have definite studies that Pinot Noir drinkers have a 15 percent higher IQ than Cabernet Sauvignon drinkers.”