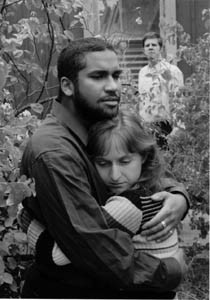 ‘The Stone Trilogy’ tells stories about peace and conflict

Guns are rarely destroyed. They migrate–finding the closest hatred, the most willing buyer–from conflict to conflict, getting passed through hands like gardeners might pass on valuable heirloom seeds.

One smoking gun is what links the three episodes in The Stone Trilogy, a play by Ian Walker being staged at the Luther Burbank Center on Oct. 5. The performance benefits CONTACT Africa.

“I think of it as an intimate epic,” says Walker, who wrote the play “from ideas that had been pushing around in my head for a while about conflicts and repeating histories and what’s common about them.” The three pieces are set in 1999 and follow the gun from Ireland to South Africa to San Francisco. The underlying element, says Walker, “has to do with love in the face of societal or racially motivated conflict.”

Though the play was not written in conjunction with the activities of CONTACT Africa, Walker notes that it does deal with the “issues that create the conflicts that CONTACT Africa is trying to deal with.” And as Rick Brown, a managing partner with the Results Group in Santa Rosa and a founding member of CONTACT Africa, points out, the first step to “conflict transformation” is understanding the root histories that can lead to dehumanizing the “other.”

CONTACT Africa grew from the CONTACT program (Conflict Transformation Across Cultures) at Vermont’s School for International Training. There on a sabbatical last summer, Brown met a group of people, mostly from Africa, who were interested in seeing CONTACT’s methods applied to the countries of Africa.

CONTACT’s approach has grown largely from the theories and experience of Dr. Paula Green, executive director of the program and one of the key leaders internationally in developing this conflict transformation notion.

“The notion of conflict transformation is something that has emerged in the peace-building field in the last 10 to 15 years,” says Brown, sitting in his Santa Rosa office. “The primary focus,” he says, “is on taking people . . . who are interested in not just stopping conflict but actually using conflict situations as a foundation for building the capacity for societies to be more peaceful.” This means exploring the conflict’s history and the mythologies that lead to it.

Mythologies play a large role in the conflict transformation process. In Africa, as in many places, conflicts have arisen based on the mostly arbitrary lines drawn by the colonial powers. Brown points to the Tutsis and the Hutus in Rwanda as an example. “Genetically, they’re no different; culturally, they have the same basic value systems, but in order for the Belgians to control Rwanda during colonialism, the basic technique was divide and conquer. So they created the mythology of being different. People come to believe these things; they become the truth.”

CONTACT Africa’s method breaks down this mythology by using deep listening and really understanding the roots of subconscious prejudices–rehumanizing the “other.”

Participants tell stories–positive and negative–about themselves and others. “Deep analysis” is the next step, in which assumptions that come up in the listening and the telling are analyzed. The point, says Brown, is that you see and hear the other person “through the lens of that assumption set. The act of that dehumanizes them, which makes it more likely that you can commit violence against them.”

This listening and analysis goes both ways–between listener and teller–because “it’s one thing to see how what they’ve done to you has formed your impression of them, but to get to the level where you see what you did to them–what your people did to them–and to accept that responsibility, that’s where you get the transformational aspect.”

CONTACT Africa is working to support people who are doing this kind of peace-building work in Africa. The goal is to “build a critical mass of leadership who promote this model,” Brown says.

Saturday’s performance will raise much needed funds for the project, and in a time when peace building is waylaid in favor of war mongering, The Stone Trilogy offers thoughtful alternatives.