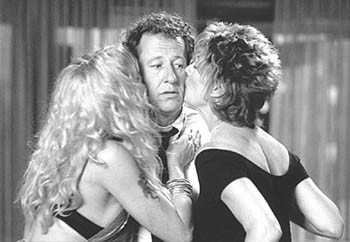 Pamela Des Barres is awake. Sort of. “Um, can you call me back in 15 minutes? I just got up,” she yawns, all husky-voiced. I’ve called her at the pre-arranged time of 10 in the morning to talk about The Banger Sisters, in which Goldie Hawn and Susan Sarandon star as one-time rock and roll groupies doing the Big Chill thing after 20 years.

Former groupie Des Barres–the free-spirited author of I’m with the Band: Confessions of a Groupie–managed to score an invitation to last night’s big Hollywood premiere of the film and clearly she has yet to fully recover from the postfilm party. “Yeah, I guess I had one too many free drinks last night,” she laughs, and we agree to try it again in, say, a half hour.

That should give time for the caffeine to kick in.

Des Barres–whose numerous fluid exchanges with famous rockers are related in juicy detail in her book–is without question the most famous groupie alive, right alongside the infamous Cynthia Plaster Caster. Cynthia’s the one you may have heard of, who made plaster molds of rock-star genitalia–and who, it so happens, was Des Barres’ thoroughly appropriate date at last night’s party.

Still based in Los Angeles, Des Barres was once a member of the legendary GTOs, Frank Zappa’s pet-project girl group. Now something of an icon, she’s written extensively about the rock and roll scene of the ’60s and ’70s, and contributes a regular column to E! Online. She’s even established her own slightly eccentric and characteristically unabashed website (www.pamelades-barres.com). The way Des Barres sees it, the groupies of the ’60s were not mere sex partners for testosterone-poisoned guitar players; they were groundbreaking, chance-taking muses, selflessly nurturing the creative impulses of the world’s up-and-coming musical geniuses.

And that’s pretty much how they are remembered in The Banger Sisters.

“I have no complaints about the way the music scene and the groupie situation was depicted,” she enthusiastically proclaims after we’ve reconnected later in the morning. “In this movie,” she says, “there was no guilt and no shame attached to having been a groupie; there was no sense of naughty-naughty-naughty going on.”

Barely stopping to take a breath–caffeine, it’s a wonderful thing–Des Barres says, “A groupie was more than just some girl who wanted to get laid by any member of the band. Sure, it may have been like that in the late ’70s and the ’80s, but when we were doing it, it was more about being a part of the scene. It was about being embraced by the group, like we were embraced by all of Led Zeppelin–who, I must say, adored me.

“Eventually,” she continues, “the word groupie became so tarnished. That’s why this particular film will be very uplifting for the real groupie. It definitely takes some of the stigma from the word groupie.”

To hear Des Barres describing the good old groupie days, it almost makes one wish The Banger Sisters wasn’t set entirely in the present. Aside from one wistful montage of footage from the ’60s–beautiful people cruising Sunset Boulevard, blissful crowds surrounding the Whisky-a-Go-Go, dancing in the streets–the film never attempts to recreate the past.

“But that footage was great, wasn’t it?” Des Barres almost shouts. “I kept looking for myself in that footage. It was so incredible. It was such a nostalgic moment for me, sitting there watching that. I went, ‘Oh, my God! Oh, my God!’ I’d almost forgotten what it looked like. It was like watching some mythological era spring to life. It stunned me.”

“But isn’t it hard to look back at the ’60s,” I ask, “without also thinking of all those dark pieces in the picture? Vietnam? Altamont? Manson?”

“It turned dark eventually,” she allows, “but there was so much incredible optimism at first–the Beatles era and all that. And that’s important to remember. Also, musically, the 1960s was the most profound moment in history. So let’s think about that. It was a revolutionary time. I truly believe that in hundreds of years, people will look back on the ’60s and see it as a great musical renaissance. And Frank Zappa will be revered as a kind of Beethoven.”

“And how about you and Cynthia?” I ask. “How will you be viewed by future generations?”

“Oh. Well,” Des Barres laughs, “I think people will see us as the pioneer women of the rock and roll world.”