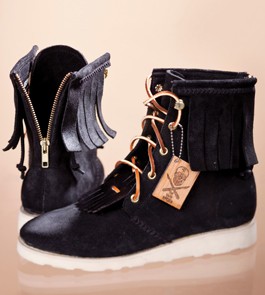 Dominic Chambrone sits in the Santa Rosa garage that doubles as his workspace, stacked with sewing books, glue, expensive fabrics and leathers, and, of course, befitting someone known as “the Shoe Surgeon,” boxes and boxes of shoes ready to be dismantled. “I’ve always been known as the ‘Shoe Guy,'” he says, plainly.

“I want to create something that’s high-quality and fits comfortably,” Chambrone explains, describing how he retrofits sneakers with an industrial sewing machine given to him by his father, using everything from leather to stingray to Swarovski crystals (another Bieber commission). He’s created a pair of fuchsia hightops for the L.A. based company Android Homme, which were worn at the MTV Video Music Awards by the Black Eyed Peas’ will.i.am, and filled orders for Miami rapper Rick Ross.

Justin Bieber’s latest contact was in ordering 10 more pairs of Chambrone’s custom-designed high-tops. But even as Chambrone jumped at the opportunity, the pressure proved intense, causing the 25-year-old to reassess his goals as a shoemaker. Currently apprenticing with Windsor cobbler Daryl Fazzio, the Shoe Surgeon is learning how to make a complete shoe from scratch, sole to tongue. Being a cobbler is an age-old American craft, notes Chambrone, and he’d like to see that craftsmanship return to a society obsessed with low-quality shoes usually made in China.

“I feel gifted,” he says, sitting comfortably among the tools of his chosen trade. “Some people are stuck in a shitty job, but I’m a super passionate person and I need to be doing something amazing.”