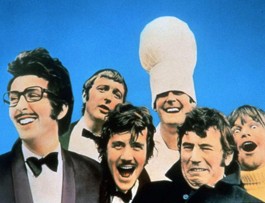 “Nobody expects the Spanish Inquisition!” This rallying cry for high school geeks and British comedy lovers everywhere will be on full display—along with “the Argument Clinic,” “Four Yorkshire Men” and “the Dirty Fork”—at Mostly Python III on Sunday June 12. Paul Stokeld, co-owner of the Toad in the Hole Pub, says the idea came about to do something “silly and English and eccentric.” And Python definitely fits that bill.

The all-day event, with the blessing of the city, takes over the entire block of Fifth Street in front of the pub. Hay bales, live bands, bangers, Black Sheep beer served in Holy Grails and silly walks will fill the street.

The skits will be performed by the Toad Players, a group of pub regulars who have done some acting and are willing to do ridiculous things out in public. “A few are in local theater groups, but mainly they’re all just doing it for fun,” says Stokeld. The musical lineup includes Tabaltix, Robert Herrera, the Crux, Mr. December and Crazy Famous, and juggling will be in effect.

What about those who just don’t get the comedy of the renowned British comedy troupe—you know, those Grim Reaper types who don’t think funny walks are all that funny?

“They can just drink,” says Stokeld. Or partake in the Argument Clinic.