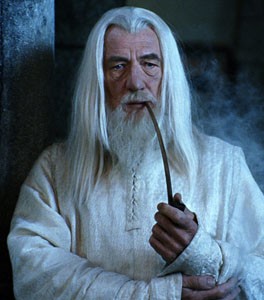 ‘The Return of the King’

Great White Wiz: If only Mordor were nearer the Shire, Gandalf and Frodo could have fought evil more quickly.

“I liked the volcano,” Reed Martin declares enthusiastically. “I really believed in it. And that big spider, that was great! I think I actually jumped.” We stand up, partially dazed, following three and a half hours in a movie theater. After establishing a mutual need for caffeine, we exit the multiplex and begin to probe the guts of the cavernous adjoining shopping mall for coffee.

Martin, an actor, author and sometime accordionist, is best known as “the funny bald guy” of the intellectual comedy troupe the Reduced Shakespeare Company. For a quarter of a century, the RSC has been taking Western civilization’s favorite stuff (Shakespeare’s plays, Wagner’s Ring cycle, American and world history, the Bible) and shrinking it down into scandalous, 90-minute, onstage comedy extravaganzas.

This afternoon, as we wander the mall among Gap stores and kiosks selling custom license-plate frames, Martin–a former Ringling Brothers and Barnum and Bailey circus clown–continues to list a few of his favorite things from The Lord of the Rings: The Return of the King. Just days away from that film’s anticipated victory at the Academy Awards, Martin has just experienced it for the first time.

“I liked the lumpy evil guy–was he an orc?–the one who looked like the Toxic Avenger,” he announces brightly. “And I also liked that flaming iron pig-head the orcs use to batter down the doors of the castle. It was like some creepy decoration from a really bad barbecue joint. It scared me. I liked it. But I couldn’t figure out why everyone was whispering all the time. And tell me this, is that Elrond guy related in any way to L. Ron Hubbard? I think there are a lot of similarities.”

I’ve invited Martin, a longtime resident of Sonoma, to see Return of the King today in part because he’s never seen any of the films (how is that possible?), but mainly because Lord of the Rings is one of the works covered by the RSC (which includes Austin Tichenor and Matt Croke) in their newest stage show, All the Great Books (abridged).

“Actually,” Martin explains sheepishly, “we cover Lord of the Rings by saying we’re not going to cover it. In the show, we set out to perform the 88 greatest books in Western literature, theoretically, in a remedial literature course with the audience as students. We’re the substitute teachers because the regular teacher has been, uh, trampled to death at a J. K. Rowling book signing, so we have to cover these 88 books in two hours, and Matt starts looking at the syllabus and goes, ‘Hey wait a minute! Lord of the Rings isn’t on here!’ And I go, “No, nor is the Communist Manifesto!’ To which Austin says, ‘That’s right. No fantasy.’ And that’s how we handle Lord of the Rings.

“Of course,” he adds, “I’ve never actually read The Lord of the Rings.”

I am stunned. “You’ve written a show about the greatest books ever written,” I point out, “but you’ve never read Tolkien?”

“Well, I did read The Hobbit, when I was really young,” he says. “But it must have really scarred me, because after that I couldn’t work up the desire to read the other ones. I did like the movie, though.”

It’s my turn to stun Reed Martin by informing him that since the release of The Return of the King, people have been throwing Frodo parties, watching the extended DVD editions of the first two movies and then rushing to the theater for the big-screen conclusion.

“Oh my god!” He exclaims. “That’s almost as big an epic as sitting through all five Planet of the Apes movies!”

“So then,” I ask, “if you were in charge of condensing Lord of the Rings into a manageable running length, how would you handle it?”

“Let’s see, to reduce Lord of the Rings . . .” Martin murmurs. “I guess the first thing I’d do is make that volcano a whole lot closer. If Mordor was right next to the Shire, you could do the story in one two-hour movie. Gandalf says, ‘Here, Frodo, you must carry the ring,’ and Frodo goes, ‘Oops! Dropped it in the volcano!’ End of story. Nice and short.”