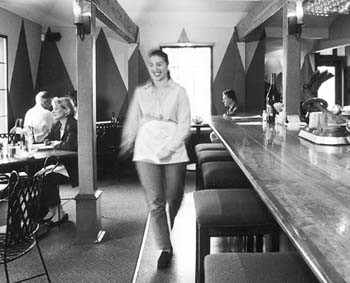 THE FIRST TIME we dined at the Orchard Inn a few months ago there was, for whatever reason, a severe shortage of servers. The wait was so long that one impatient couple gave up and left just moments before the lone waiter finally emerged from the kitchen proudly holding their steaming plates aloft, only to be greeted by the sight of two crumpled napkins tossed onto the empty table.

Our latest visit to this small Santa Rosa bistro (a former bar tucked away off Old Redwood Highway near Cardinal Newman and Ursuline high schools) was a very enjoyable experience. The family-run eatery, which opened in November, is a partnership between Julya and David Franco (who are new to the restaurant biz, but owned five bierkellers in Berlin during the 1960s), and daughter Adelle (who masterminded the distinctive interior design and landscaping). French-trained chef Chris Pusich, who logged seven years at Equus Restaurant, runs the kitchen.

On this night the friendly staff, now well versed in the needs of hordes of customers rushing to dine before curtain call at nearby Luther Burbank Center, greeted us warmly and immediately showed us to our seats.

We were fortunate enough to nab one of the four tables in a cozy, cocoon-like dining area that has a low copper-tiled ceiling, warm ambient lighting, and a large ornate wall mirror. Harlequinesque elongated diamonds painted in soft greens and deep roses decorate the walls. Wooden tables hold golden-beaded tea lights and arrangements of fresh calla lilies. The seating includes wrought-iron chairs that are pretty, but need cushions.

We kicked off our meal with eggplant bruschetta ($3.75), which featured crisp toasted rustic bread piled generously with a savory relish of grilled eggplant, capers, roasted red bell peppers, garlic, and parsley. The ingredients were good and fresh and it was all very flavorful, but the relish had a strange, almost off-putting, tanginess that felt almost effervescent on the tongue.

The hummus appetizer ($3.25) came with fluffy triangles of thick pita (the bread would have been even better heated) that surrounded a ramekin of hummus accompanied by tomato slices, black olives, and a scattering of parsley. It made a colorful presentation on the white plate, but the chickpea purée desperately needed more seasoning and a heavy-handed spritz of lemon juice. Alas, there was no lemon slice on that plate, and it would have made all the difference.

Things got back on track with the citrus spinach salad ($6.75), which was a delight. A bed of immensely fresh baby spinach leaves in a mild citrus dressing, topped with crunchy sweet pecan halves, crumbles of creamy sharp Gorgonzola cheese, and juicy sweet tangerine segments made an exciting combo. These crisp greens with a side dish of the Orchard Inn’s au gratin potatoes (see below), some crusty bread, and a glass of beer or wine would make a great light meal.

Another success was the barbecued ribs ($9.50), which boasted tender morsels of pork falling off the bone, enveloped in a clingy bourbon-honey sauce. The ribs were served with firm matchsticks of carrots cooked in beer, butter, and dill. But the real star was the second side dish– an expert potatoes au gratin– meltingly hot and creamy scalloped potato slices enhanced by melted cheese and fresh herbs. Yum.

GRANDMOTHER’S chicken ($8.75) was indeed just like grandma used to make–if she lived in Lyons or Lille. A small but richly flavored portion of chicken was cooked in white wine sauce and topped with tarragon, thyme, mushrooms, tiny pearl onions, and bacon, which infused the flavor, making it taste as opulent as Christmas dinner. The chicken was also served with the carrots and more of those praiseworthy potatoes.

The disappointment in the entrée lineup was the daily special: a lackluster vegetarian lasagna ($10.50) featuring an unimaginative spinach filling smothered with an abundance of cheese, pasta, and tomato sauce.

The restaurant has a fair-sized wine list covering most local varietals. The 1995 Clos du Bois merlot ($26) recommended by our helpful server was mellow but strong enough to stand up to the zesty sauce in that lasagna, and also made a pleasing accompaniment to the ribs.

Desserts feature a rotating selection of sorbets, gelatos, and fresh-baked daily specials. The house-made chocolate caramel walnut torte ($4.25) was a dense concoction with hard gobs of caramel hiding within that could lead to some serious dental work. Far better was the house-made almond cheesecake ($4.25), which surprised us with an initial huge hit of intense almond flavor that mellowed in the mouth and subsided into a silky smoothness.

If you’re looking for a casual but chic restaurant serving moderately priced, bistro-style comfort food, this is the place. The owners plan to open an outdoor patio dining area this summer, and hope to expand the kitchen to serve breakfast by fall.