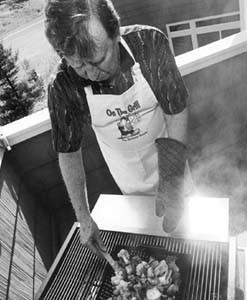 THE TASTE OF summertime is soft and sticky baby-back ribs slathered in honey-sweet sauce, hickory-smoked chicken breasts, and grilled hamburgers. For carnivores, these flavors go with sunshine the way white wine goes with baked salmon.

That is, if you know what you’re doing.

Seems that every time I get near a grill something goes terribly wrong. I cause an explosion by lighting the charcoal with gasoline. I hyper-cook the hamburgers, so that they’re blackly burnt on the outside, cold and raw on the inside. Or I ladle so much ill-conceived homemade sauce on the dinner that everything tastes like a coffeehouse full of patchouli-wearing nouveau hippies (and gasoline, of course).

It simply doesn’t seem right that a young American male–one from the South, I might add–can’t whip up a decent feast in his own backyard. Barbecue, grilling, backyard cookin’, whatever you want to call it, is as American as baseball or McDonald’s hamburgers, or even sex scandals. It is the last surviving outpost of ’50s machismo. In all other aspects of modern life, men are expected to be thoughtful and sensitive, but not on the grill. There man becomes an anachronism, dating farther back even than the days of Leave It to Beaver, a prehistoric hunter searing his meat for the betterment of his tribe, braving the fierce fires to provide sustenance for his family.

Sure, the hunt has been replaced by a quick jaunt to the meat section at the local grocery store, but on a subconscious level (psychologist Carl Jung would babble about archetypes, I suppose), it’s as manly as modern life gets.

In desperation, I turned to Sonoma County barbecue guru Steve Tyler for some tips. Tyler, who has written a cookbook on the subject (On the Grill: The Backyard Bungler’s Barbecue Cookbook), as well as a bimonthly column for On the Grill magazine) agreed to have me over for an afternoon of instruction and great grilled food.

When I arrive at his home, Tyler, a kind man with ruddy cheeks and a ready smile, shakes my hand. “I didn’t graduate from a culinary academy,” he says, soothing my worry. “Most people on the grill are bunglers, not gourmets.”

Bunglers? I can relate.

However, though fun is the goal, outdoor cooking is serious stuff to Tyler. In addition to writing about the subject, he owns Grill and Gourmet, an all-purpose Santa Rosa store for outdoor-cooking enthusiasts. There you can purchase everything from high-quality gas grills to those inexpensive doodads you stick into the sides of hot, buttery corncobs.

Tyler says most people have misconceptions about his favorite subject. For instance, the terms “barbecue” and “grilling” really aren’t interchangeable. “Most people in Califor-nia don’t barbecue,” he explains. “People in California grill. Barbecue is a long-term process over low heat.”

It also always involves beef, pork, chicken or lamb. Grilling, on the other hand, is done over high heat for a short time and includes fish and vegetables.

Bent over his grill, Tyler expertly prepares our feast: blackened catfish and stir-fry madness, recipes from his book. As he constantly adjusts the levels of the coals beneath the food, he describes the differences in regional cooking styles. For instance, in South Carolina, the meat of choice is almost always pork flavored by a vinegary barbecue sauce, while in Texas it’s beef briskets in a sweet tomato- and molasses- based sauce, which during big barbecues is lathered on with kitchen mops.

The thrust of Tyler’s cooking philosophy is served up in an acronym he likes to throw around: KISAKE–keep it simple and keep experimenting. He avoids complex culinary trickery and spices. “I hate it when a recipe calls for an ingredient that costs $18 for a small bottle, and which you only use once,” he says. Instead, he relies on basic recipes and household herbs.

However, Tyler warns, “It is still pretty easy to screw it up.”

The main problem novices encounter is cooking food too long over too high a heat (i.e., burning it). Tyler demonstrates a sure-fire method for determining the heat of your grill. Holding his hand about an inch above the coals, he explains, “If you can only keep this up one to two seconds, that’s high heat.”

Four to five is medium; six or more is low.

TOOL PURCHASES are another way novice barbecuers/grillers often go wrong. For one thing, the utensils you have in your kitchen are virtually useless, unless you like your forearms scalded. Long-handled, heat-resistant tongs, spatulas, forks, and brushes are a necessity, Tyler insists. Also important, naturally, is grill selection. If you only plan to cook the occasional hamburger or hot dog, a simple kettle-style charcoal grill will do. But if you plan to do serious grilling, it is best to buy a high- quality wagon grill. Expect to pay between $500 and $3,000 for one of these.

Also, to assure that your food has the characteristic smoky flavor of grilling, Tyler suggests charcoal over gas grills.

Later, as we sit and savor the wonderful catfish dinner, enjoying the sharp, clear sunlight, Tyler points out that the reason people grill isn’t merely because of the taste. It isn’t even about being macho (though he’s the first to make jokes about that himself). “Cooking outside is enticing,” he says simply. “In the kitchen you are restricted. Outside you are in beautiful surroundings; you have the flavor of the fire.

“It’s an experience you cannot match inside.”

The dry rub on this fine Mexican game fish is tangy to the tongue.

Wash fillets, brush evenly with olive oil, and set aside. In a food processor or blender, combine dry ingredients. Rub mixture over both sides of fillets. Grill over medium-hot fire for 8 to 10 minutes, turning once or twice. Remove from grill and serve at once. Serves 6.