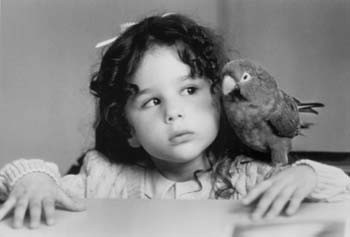 In his ongoing quest for the ultimate post-film conversation, David Templeton discusses interesting movies with interesting people. This week he phones up Dr. Jeffrey Masson to discuss the offbeat new talking-bird movie Paulie.

WHEN JEFFREY Masson went to see Paulie–a strange, low-profile adventure about a talking parrot on a quest to find his way back to the little girl he loves–the renowned author’s expectations may have been unrealistically high.

As demonstrated in his best-selling books When Elephants Weep (Delta, 1996) and Dogs Never Lie About Love: Reflections on the Emotional World of Dogs (Crown, 1997), Masson maintains a notably rich appreciation of all animals. After years of research and study on the inner lives of beasts and birds, one could say that he has come to feel their pain–as well as their joy, love, anger, frustration, petty jealousies, and the occasional fit of existential angst. So when a movie pops up claiming to offer a peek into the hopes and dreams of a homesick parrot, Masson knows exactly how potent that movie could be.

“They weren’t telling me anything I didn’t already know about birds,” he good-naturedly grouses, speaking by phone from his home in Berkeley. “Though some of the bird scenes were remarkable.”

“There is something magical, isn’t there,” I tentatively suggest, “in the ‘talking animal’ genre of movies, with Francis the talking mule wandering up and spouting flawless Midwestern vernacular?”

“I think that’s why movies like Babe get under our skin,” Masson replies. “We love talking animals.”

“And isn’t that part of why we are so taken by parrots?” I further probe. “With parrots we can almost believe that animals could start to talk.”

“You know, I was reading one of the great books on parrots recently,” he suddenly recalls. “It’s called Parrots of the World, a huge, magnificent volume, the best work ever written about parrots. In a very short introduction, the author says, ‘People don’t know that much about the behavior of wild parrots, but one thing we do know is that parrots do not imitate sounds in the wild.’ And I thought that was fascinating.

“Here we have a type of bird that is famous, in our world, for imitating human sounds, and yet in the wild, the parrot never does that. It doesn’t imitate other species. So it really makes you think, what is a parrot doing then, in captivity, when it imitates human speech?”

“What do you think it’s doing?” I wonder.

“Well, I think they are trying to communicate with us,” he says, matter-of-factly . “I don’t believe they are merely imitating us. I think they are trying to figure out how to talk! Thanks to Irene Pepperberg, who’s a very great scientist, scientists now know that certain parrots–African grays in particular–are indeed capable of understanding words. They can learn the meaning of up to 50 words. They can count. They can tell the difference between a round object and a square one. And if you ask them certain simple questions, they can answer yes or no and always be correct. So it turns out that parrots are not just ‘parroting’ us, as we’ve always thought. They actually know something.”

One example–prominently featured in When Elephants Weep–is Alex, Pepperberg’s African gray, a parrot with a nasty fear of veterinarians.

“Alex had to be left at the vet for an operation once,” Masson retells the tale. “When Irene started to leave, Alex screamed out, ‘Stop! Please! Don’t go! I love you! Come back!’

“She says there’s no way Alex knew those individual words–he didn’t know the word ‘I,’ he didn’t know the phrase ‘come back’–but somehow he managed to piece that together, and he got both the words and the music correct. What he was really trying to say was something emotional: ‘Don’t leave me, don’t abandon me, I need you.’ And that was unmistakably his message.

“I had a parrot that used to bite my girlfriend’s toes,” I offer. “He was insanely jealous. He’d chew up her shoes when she wasn’t looking.”

“Parrots are among the most emotional of animals,” he affirms, appreciatively. “They can be very jealous, they can get embarrassed, they can be humiliated, they can be lonely. They get nostalgic and pine for lost loved ones.”

OF HIS OWN parrot experience, Masson says, “My parrot would routinely fly away from our balcony. We lived up above Tilden Park in Berkeley. About once a month he would suddenly decide, this is it, he was leaving, and off he’d go into the hills. The first time it happened I thought, ‘Oh my god, there’s one gone parakeet,’ but about 2 in the morning, I heard this incredible screaming. It was my parrot. I jumped up and ran out, and down in the middle of some valley, screaming his head off, there he was. It was clear to me that he was calling me, so I ran down and found him, and brought him back. He did that three or four more times.

“Eventually he did disappear,” he notes with a hint of sadness.

“That’s the theme of the movie, isn’t it?” I point out. “Lost bird trying to get home.”

“And that’s perfectly legitimate,” he agrees, “that that kind of bond could form between a parrot and a person. A parrot probably would try to find its way home.

“But back to the notion of parrots talking,” he skillfully segues. “It would be a good idea if we spent more time trying to understand what parrots–animals in general– are already saying to each other, rather then trying to teach them our language.

“Nobody, as far as I know, though, has ever lived with a pack of birds,” he admits. “There are myths of people being raised by packs of wolves, but it would be harder of course to join a flock of parrots. How would we keep up with them?

“It’s not impossible, though,” he brightly adds.

“And it would make a pretty good movie,” I mention.

“It would,” he laughs. “In fact, I think people would flock to see that one.”