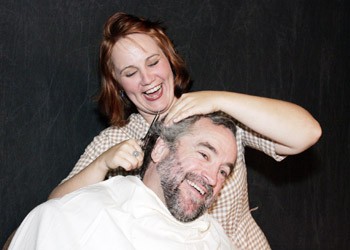 ‘The Most Happy Fella’

‘Did you ever see the episode of I Love Lucy where Lucy and Ricky and Fred and Ethel all go to see The Most Happy Fella on Broadway, but they only brought one pair of tickets, so they all have to take turns watching parts of the show, and Lucy and Ethel cause all sorts of mayhem trying to sneak in and catch the parts of the show that Fred and Ricky are already watching, and you never see what’s going on down on the stage, but you hear the music being sung as Fred and Ethel and Ricky and Lucy are popping up and down and spreading trouble?”

This convoluted question has just been posed to Nina Shuman, the musical director of Cinnabar Theater’s upcoming five-week run of Fella, which in 1956 became a huge hit for Frank Loesser (Guys and Dolls). The I Love Lucy episode ran a year later, in mid-1957, when Fella was still selling out on Broadway.

“You’re kidding! I Love Lucy? That’s so wild!” laughs Shuman, who confesses to having never seen the episode in question. The show–probably the only Broadway musical ever set among the vineyards and wineries of the Napa Valley–was based on the 1924 comedy They Knew What They Wanted by Sidney Howard (who went on to write the screenplay for 1939’s Gone with the Wind). A movie version of They Knew What They Wanted, with its title changed to A Lady to Love, starring Edward G. Robinson as a lonely, middle-aged Italian grape grower looking for love in Napa Valley, was released in 1930.

The musical version, though an enormous success when it first appeared in the late ’50s, is seldom performed these days, but many of the tunes have managed to work their way into the musical subflooring of our culture. Most Happy Fella is crammed with a whopping 40 songs, its story told primarily through music, from Broadway-style tunes like the Texan-tinged “Big D” and the well-known “Standing on the Corner (Watching All the Girls Go By)” to folksy Italian numbers like “Abbondanza” and “Benvenuta.” The score has been celebrated for its ambitious scope and variety of styles.

“I absolutely love the score,” says Shuman. “It has one great song after another, and the melodic inventiveness of the score is really striking. Another thing I really like about the music is that it tells you everything that is happening with the characters on an emotional level. It tells you what is going on inside the characters in a way you usually only see in opera.”

The sprawling story involves the fits-and-starts relationship between insecure, lovestruck grape grower Tony and the pretty young waitress from San Francisco named Rosabella who agrees to marry him based only on his letters and a photograph that turns out to be of someone younger and more handsome. Though all of this might make Happy Fella seem light and frivolous, there is plenty of realism and edgy twists and turns, with characterizations that are far from black-and-white. The music, since it was written to tell the story of Italian immigrants and Texan transplants, has plenty of Italian and Texas flavor. For the Cinnabar production, in lieu of an orchestra, Shuman is using a rare two-piano arrangement.

“It’s different from the kinds of reductions that usually exist for piano,” she says, “in that it takes the score and embellishes it beyond what a single piano could do, even beyond what the orchestral arrangements can do. There are a lot of beautiful countermelodies in the two-piano version that aren’t in the orchestral version.”

As for the cast, Shuman praises the entire ensemble, which includes a number of accomplished actor-singers from around the Bay Area. She predicts that audiences will especially take to the three actors who play a trio of musical Italian cooks.

“Those are really fun roles,” she says. “They have some very florid singing. They get to do quite a bit of vocal hot-dogging.”

Vocal hot-dogging? Sounds like something Lucy would approve of.