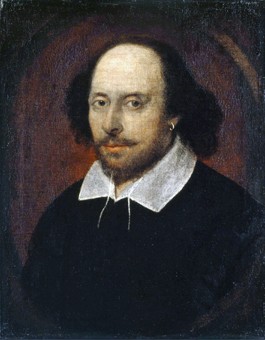 The Million Word March (or April)

The English language slouches toward that hella ginormous sixth zero

BEAT THE BARD! Shakespeare utilized some 60,000 words. The average American? Not so much.

By the end of April, the English language will be 1 million words strong. At least it will be if you believe the Global Language Monitor, an organization that uses live people combined with computer algorithms and chicken entrails tossed into a fairy circle during the full moon to track trends in language around the world.

According to them, English picks up a new word every 98 minutes, which is about 15 a day, 105 a week, or just enough to make my spellchecker feel really dumb, and if there’s anything worse than a spellchecker with low self-esteem, it’s a user who thinks anthropomorphism in computer programs is OK to talk about in public. They don’t say anything about words being kicked out, so we can assume English is the packrat of languages, and it only gets bigger, with towering piles of old words stacked everywhere. I never realized how much English was like my grandfather.

A million words is a lot, even though it’s only about 1-750,000th the number of dollars the government handed out in an effort to make sure George Bush doesn’t wind up being known as the Herbert Hoover of the New Millennium. On the other hand, when you consider that the new TV show Million Dollar Password is giving away—go ahead, guess!—yes, a million dollars, maybe it’s not such a big number after all. But to paraphrase politician Everett Dirksen, “A million words here, a million words there, pretty soon you’re talking about not being able to finish a crossword puzzle.”

A million words is way more than any dictionary includes. Most standard dictionaries define about 200,000 words. The Oxford English Dictionary (motto: “More words than you can shake a cudgel at”) has about 600,000, and it takes 22,000 pages in 20 volumes and two hernias to list them all. That means either the Global Language Monitor has heard of words the OED people haven’t, lost count after “obfuscation” and don’t want to admit it, or make up words knowing no one’s going to go through a vocabulary list that long.

While that sounds like a lot of words, stop and consider that there are 1.35 billion people on Earth who speak English. That means there’s only one word for every 1,350 speakers. I don’t know about you, but I’d hate to find out I was one of those people who didn’t have his own word, though should that happen, I’d make one up just so I could feel important. Maybe a word like “grobbish.” Or “pongroid.” If I could convince the Global Language Monitor to recognize these, then I’ve just managed to push the Million Word Day a little bit closer. Heck, with some thought and mittens on my hands when I type I could probably manage to single-handedly move the date up to next Tuesday.

The question is, do we really need a million words? The average American knows about 20,000 words but only uses 7,500 of them in a given day. This means that on most days we have a storehouse of 12,500 unused words gathering dust in the crannies of our cerebellum. Or should I say the recesses of our mind. That being the case, what could we possibly do with 980,000 more of them? Where would we put them all? As it is, I’m afraid that if I stuff one more thing into the right side of my head, my social security number’s going to fall out my left ear. Heck, even Shakespeare knew only about 60,000 words, and half the time we don’t have a clue what he’s saying without listening to a podcast of the Cliff’s Notes. If he’d known a million words, even Cliff wouldn’t be able to figure out what he was saying.

I’m not sure what most of the new words that are popping up every 98 minutes are, but I’m sure they’re things like “repurpose,” “ginormous,” “hella” and its grade-school equivalent, “hecka,” and “Obamalovefest,” which may or may not last depending on whether bankruptcy becomes the leveraged buyout of the decade. Either way, I’d better stop on the way home tonight and pick up some flash cards if I’m going to have any hope of keeping up. Or ever winning at Scrabble again. But keep in mind that just because a word enters the language it doesn’t mean it’s going to last. I mean, they can’t all be “grody,” “Y2K” and “Macarena,” you know.

The Global Language Monitor estimates that the millionth word will show up around April 29, but they say it could be as soon as March 30, which makes it very difficult to invite people to a million word party. And while they’re predicting the date, they’re not predicting what the millionth word will be. It’s a safe bet it will be something we’ve never heard before. And very likely something we won’t hear again in six months. But that doesn’t mean we can’t enjoy it in the meantime. You know, while we’re waiting for another ginormous number of hella repurposed words to join the

The words were chosen from those gathered from the worldwide fashion media and nominated by key fashionistas. This exclusive ranking is based on GLM’s predictive quantities index, a proprietary algorithm that tracks words and phrases in print and electronic media, on the Internet and throughout the blogosphere. The words and phrases are tracked in relation to their frequency, contextual usage and appearance in global media outlets.

Is your mind so muddled that most of this is familiar? We challenge you!

1. chiconomics The drive to chicness remains strong though affected by economic crisis.

2. Michele Obama Michelle says “Yes, we can!” to bringing back a sense of fashion to the White House, further popularizing the single-shoulder look.

4. metallics Move over silver and gold, this year it’s coppers and bronze, as well as pewter tones.

5. gladiators From chunky platforms to criss-crossed flats, one of the biggest shoe trends of the new century.

6. recessionista Fashion designers, trend-setters and icons who set out to weather the world economic crisis while looking fabulous.

7. voluminous As in volume-mungous. Sometimes combined with the sheer look to dramatic results.

8. ferosh A combination of “fierce” and “ferociousness,” popularized by Project Runway’s Christian Siriano.

11. draping or Grecian or goddess The Greco-Roman goddess look continues its 2,500-year comeback.

12. eco-fashion Couture with carbon-offsetting properties; the green movement has not invaded haute couture—yet.

13. on trend The trendy way to say trendy.

15. fast fashion The successor to High Street; the ability to produce low-cost knockoffs, includes such retailers as H&M and Target.

17. tie-dyed silk Black silk is everywhere, even in tie-dyed creations.

18. muffin top No worries on the runway, but a muffin top is seen when the belly spills over the waistband in exposed midriff fashion.

1. BeijingThe Beijing Olympics were the most-watched television show of all time, with some 4.7 billion global viewers.

3. “It is what it is” Everywhere on the tube from The Wire to the Roger Clemons Steroid in Baseball Congressional hearings.

4. “Facts are stubborn things” John Adams’ quaint turn of phrase for “it is what it is.” The John Adams biopic won the most Emmys ever for a single program.

5. Phelpsian New word coined to describe the Phelpsian Pheat of winning eight gold medals in a single Olympics. (In 2009, see “blowing it.”)

7. vincible The invincible New England Patriots prove vincible after all, with a shocking upset by the New York Giants in Super Bowl XLII.

8. lip-synching Lin Miaoke, the little girl who didn’t sing the song the whole world sings in the Olympics opening ceremony.

9. lipstick On a pig or otherwise.

10. IPTV Internet-protocol-based television, the wave of the future.