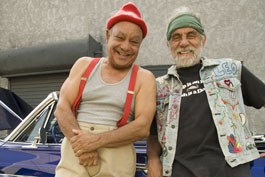 Turns out going to prison was a good career move for Tommy Chong. An eager prosecutor named Mary Beth Buchanan, encouraged by former U.S. attorney general (and general tool) John Ashcroft, used an old law on the books in Western Pennsylvania to bust 55 people for selling bongs over the Internet. Because Nice Dreams, one of the businesses indicted, was run by Chong’s son Paris, Tommy took the fall, pled out and was the only defendant to do time.

A documentary, AKA Tommy Chong, followed Chong as he prepared for incarceration, and was well-received on the festival circuit. After his release, Chong was invited to late-night talk shows, bookings for his standup act improved and talks to reunite with his old partner, Cheech Marin, led to the current tour, the first in 25 years.

Cheech has done pretty well for himself, with roles in films like Tin Cup, as the sidekick to TV’s Nash Bridges, and is known for his extensive collection of Latino art, one of the finest in the world.

The duo came out of the Canadian improv scene in the early ’70s and were brought to L.A. to hone the act before record producer Lou Adler put their schtick to disc, selling millions of copies. Who can forget Big Bambu with its giant rolling paper album cover? Although their routines resonated with the counterculture, they relied on proven comic influences like Bob and Ray and Abbott and Costello. From records, the pair moved to movies, with Adler directing their debut, Up in Smoke.

Stoner humor survived after the pair split in the “just say no” ’80s. Recent films like Pineapple Express, The Wackness and the Harold and Kumar franchise prove that audiences still love the hapless exploits of the majorly baked underachiever. And so, after a quarter of a century, the bud-sharing buddies are back with the Light Up America tour.