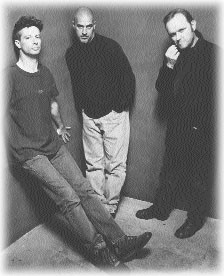 The Mermen harness a
current of rock influences

I DON’T REALLY understand what I’m doing, so the credit goes to somebody else, somewhere beyond me,” says Jim Thomas–hailed in the press as “the reluctant guitar hero”–of the sonic tsunami that drives the exuberant songs of the Mermen, the San Francisco­based neo-surf power trio. “I try to compare it to surfing, not on a small day but on a big day when you aren’t really in control.”

In a flourishing subcult that includes such innovative acts as the flamenco-flavored Aqua Velvets and the edgy Finnish neo-surf band Laika and the Cosmonauts, the Mermen actually appear to be on course, reeling in fans that reportedly include Morphine, Les Claypool of Primus, and everybody’s favorite Talking Head, David Byrne.

Named for the classic 1968 Jimi Hendrix track “1983 . . . A Merman I Will Be,” from the Electric Ladyland album, the band mines the same rich musical terrain tapped by such adventurous instrumental indie-rockers as Pell Mell and Shadowy Men from a Shadowy Planet. Fortunately, the Mermen didn’t take to heart Hendrix’s incantation that “We’ll never hear surf music again,” from “Third Stone from the Sun.” Instead they chose to plunder the rock treasure chest to blend Hendrix’s searing psychedelia with a hefty dose of ’70s punk angst, ’80s hardcore emotionalism, ’90s grunge, and, yes, even a few sanctified ’60s surf licks.

In the process, the Mermen have sculpted a vicious, visceral hybrid that rides the edge of the alternative rock movement.

“Not only do they set themselves apart by attacking the style with an almost academic will and precision,” noted CMJ critic Cheryl Botchick in a review of 1996’s Songs of the Cows (Mesa/Bluemoon), “they raise it to new, previously unseen places.”

The Mermen started out seven years ago as a garage band, playing their own versions of little-known songs previously recorded by obscure surf bands. “Eventually we just outgrew that retro sound in a substantial way and moved ahead to something we could put our own initials on,” explains Thomas, the band’s principal composer and the owner of hundreds of surf records.

The result was Food for Other Fish, a 1994 self-produced marvel that pushed the envelope of instrumental guitar-driven rock and helped define the then-fledgling neo-surf subgenre. Recorded live to a two-track DAT machine, it quickly rose to the top of the airplay chart at KUSF and garnered a local cult following. Thrasher magazine named the Mermen one of its “Top Discoveries” for that year, and the band became a top draw at the Fillmore Auditorium in San Francisco, where it played to sell-out New Year’s Eve crowds in 1995 and 1996. In the past couple of years, the Mermen have shared the stage with a dizzying list of performers, ranging from the Cramps and Midnight Oil to Chris Isaak and Rancid.

But it was last year’s A Glorious Lethal Euphoria (Mesa/Bluemoon)–awash with trebly turbulence and rumbling drumbeats–that brought the Mermen national attention. Guitar World hailed the album as “a thinking man’s shred album.” And Rolling Stone ranked it among the best of 1995.

As for Thomas, he’s still trying to figure out how the band handles the sheer force of its own sonic fury. “You have to develop certain skills to deal with it,” he muses, “but all you can do is kind of influence what happens.”