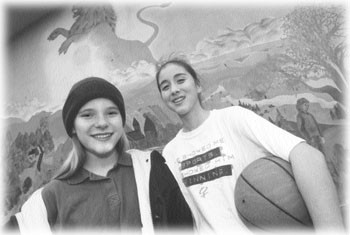 SELF-ESTEEM is a big problem,” muses 15-year-old El Molino High School student Christina Dry, adding that her sentiments typify those of millions of girls who feel “undervalued” by society–“not knowing how good you are and not having confidence in yourself.”

“The lack of encouragement is everywhere,” she continues. “The biggest problem is being told you can’t do things. It’s not said straight out, but the message is underneath everything.”

The stories and experiences of young girls nationwide are chronicled in Girls Speak Out: Finding Your True Self, a new book by educator and women’s activist Andrea Johnston, with an introduction written by feminist leader Gloria Steinem.

Johnston, a former El Molino High School teacher and ex-Independent arts critic who met Steinem in 1994 while on an assignment, is co-founder with Steinem of the Girls Speak Out conscious-raising program and convenor of the National Girls Coalition.

The book is based on Johnston’s and Steinem’s talks with diverse groups of girls, ages 9 to 15, in various cities across the country over the past two years.

Dry, one of two local girls who participated last month at a U.N. conference addressing the topic at UNICEF House in New York City, says she has gained leadership skills and confidence through the Girls Speak Out program. She was part of the steering committee for the first National Girls Conference, which was co-sponsored by the United States Committee for UNICEF. The two-day conference attracted about a 125 girls, who examined the influence of the media on a girl’s self-image; unwanted and violent harmful behavior; and human rights.

“A lot of girls have new ideas and want change, but they don’t have anyone in the community to talk to,” says Dry. “I realized that no matter where you’re from, what kind of background, it doesn’t matter–I just want to talk and hear from other people like me. We need to hear that other girls believe the same things.”

Elizabeth Foster-Shaner, 14, of Jenner, also a member of the steering committee, says she was surprised to find out how many other girls shared the same opinions. “It’s all about how society affects girls,” she says. “The problems about stereotypes, about not being taken seriously, and about mental and physical abuse.

“I’d like women and girls to be taken seriously in politics and the media. I’d like people to accept who we are, and I’d like girls to accept who they are so we can be more self-confident and change things.”

“It’s sad that magazines typically use anorexic-looking white models for us to look up to,” agrees Dry. “The media should be more realistic and send the message that it’s all right to be who you are.”

Both local girls have their writings featured in Girls Speak Out, which also uses poetry, songs, and illustrations of female artifacts from “pre-history” to make its case for Girl Power.

“Pre-history was the time before patriarchy,” explains author Johnston. “We need to show girls that things weren’t always the same with the idea that one sex was superior to the other. We each have to reclaim what’s been taken from us–it’s really about history and realizing that what we do each day is also our history.”

JOHNSTON SAYS the book is a way to find out who you are from the inside out. “There is information about sexism, racism, patriarchy, and sexual abuse introduced through noted writers and girls’ stories,” she explains. “The idea is that once girls have this information and know how to organize groups, they can work for change.”

She points out that girls who participated in the national conference are working to come up with recommendations for policymakers.
“Research shows that girls aged 9 to 15 give up on the idea of who they are and give in to outside pressure and become what I call ‘female impersonators,'” she says.

Johnston and Steinem began fundraising two years ago for the project and now work with girls of different ages, races, and income brackets. “There are also,” says Johnston, “girls of different sexual orientations and survivors of sexual abuse–girls who may not ordinarily have met each other.”

Although men and boys aren’t (as yet) invited to participate in the Girls Speak Out sessions, Johnston insists the forums are not an excuse to trash males.

“We never had a male-bashing agenda,” she says. “It’s a positive focus on who girls are and what they can do.

“To be a feminist,” she adds, “is to be someone who believes everybody matters.”

Johnston and Steinem will kick off the Girls Speak Out book tour at 3:15 p.m., Tuesday, Feb. 4, when they appear at Copperfield’s Books, 140 Kentucky St., Petaluma. Admission is free. For more information, call 823-0677.