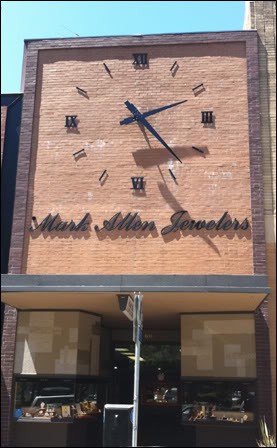 Those old eyes don’t deceive you, downtown Santa Rosans: after several years of stalled silence, the clock on the façade of Mark Allen Jewelers is up and running again.

Mark Allen himself, who estimates that a clock face has adorned the building since the ’20s or ’30s, was as dismayed as anyone that the hands had been stuck at 4:54 for the past few years. After spending “$500 here, $500 there” to make temporary fixes over the last 20 years, he’s completely replaced the old motor—which still had a five-digit telephone number printed on it—with a state-of-the-art clock motor connected to GPS to always tell the exact correct time.

Installed by a company from Missouri who’s also done similar projects at the San Francisco Botanical Gardens in Golden Gate Park and the Pentagon in Washington D.C., “it should hopefully last,” says Allen, literally knocking on wood, “another 10 or 15 years.”

Though the new clock doesn’t have a second hand (“It was almost $3,000 just for a second hand,” Allen laments), it’s got a heck of a lot of admirers in downtown Santa Rosa. What with the U.S. Bank building clock being fixed and now this, all three clocks in Courthouse Square are running! So stop by and say thanks to Mark if you get a chance—especially since he paid for it out of his own pocket without any help from the landlord.

(In other clock news, there’s a new post clock in Railroad Square that was installed two weeks ago but has yet to work. Waiting for an electrical hookup? Meanwhile, a similar clock that used to be in front of the Old Clock Shop on Santa Rosa Avenue continues to tick away in front of the Union Hotel in Occidental. Did you notice that Traverso’s brought that old green clock to their new location? Yes, I like clocks.)