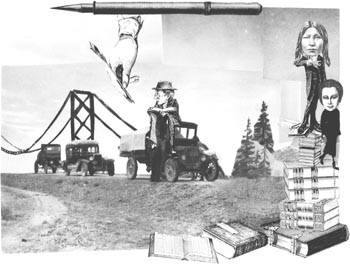 ‘The Literature of California’

Best of the West

CALIFORNIA has long been a place of mythical proportions–Turtle Island to the Indians, El Dorado to the Spanish conquistadors, and Continent’s End to the pioneers from the Eastern seaboard. Successive waves of immigrants, émigrés, and exiles have regarded it as both Promised Land and Purgatory, a refuge and a quagmire. Long before I arrived here, I created my own myth of California, cobbled together from novels like John Steinbeck’s The Grapes of Wrath and Nathanael West’s The Day of the Locust, and from films like Howard Hawks’ The Big Sleep and Roman Polansky’s Chinatown.

My California was dark, dangerous, disillusioning–an American nightmare where cops were corrupt, millionaires were criminals, and men in power betrayed “The People” time and again. Not surprisingly, I identified with Tom Joad, the Okie fugitive on the run from the law, and with Jake Gittes, the L.A. detective in Chinatown done in by his own best intentions.

Of course, I had to see the state for myself, and when I finally arrived in 1975 I was surprised. California struck me as elusive and mysterious, a mirage that rose out of the Pacific, a vast nation within the nation itself.

Like other writers before me, I set out to find the California behind the billboard along the side of the road. After a quarter of a century and thousands of miles later, I’m still searching, though I’ve mostly come to accept California as a landscape where we’re free–at least freer than in most other places–to make up our own myths and to live or to die by them.

And this is only the first of two hefty volumes; the second will cover the literature of the state from 1945 to the present, a period in which California writers multiplied furiously and raised their diverse voices to reach every corner of the globe.

This is not the first major anthology of California literature. That honor belongs to Joseph Henry Jackson’s Continent’s End, which appeared in 1944 and is acknowledged here. Other anthologies followed, including Gerald Haslam’s Many Californias (1999).

But this anthology is bigger and better than previous volumes, in part because three of the editors–James D. Houston, Maxine Hong Kingston, and Al Young–are creative writers themselves and because they spring from rich cultural backgrounds: European-American, Asian-American, African-American.

All too often California ethnic writers and women writers have been overlooked or ignored, but that doesn’t happen in these pages. Indeed, never again will anyone be able to say with impunity that California is the province of white male authors. Jack Hicks, the fourth member of the editorial team, is a professor of creative writing at UC Davis and the director of “The Art of the Wild,” an annual conference for environmental writing, a genre with a long California literary tradition that’s amply represented in these pages.

The Literature of California isn’t perfect. I would have included the insightful chapter “The Character of California” from The American Commonwealth (1888) in which James Bryce, the British diplomat and historian, wrote that California is the “most striking” state in all the United States and that it “has more than any other the character of a great country.”

IT’S A PLEASURE to find James M. Cain represented here, but I’d have chosen a chapter from his psychologically sophisticated Southern California novel Mildred Pierce rather than from his famous tour de force The Postman Always Rings Twice. Moreover, I would not have omitted the novelist and critic Tillie Olsen. Granted, her novel Yonnondio wasn’t published until 1974, but it was written in the 1930s in California–as well as in Minnesota–and it deserves to be included along with the epic and poetic novels of the Great Depression. (The editors promise that Olsen will appear in volume two, but that’s too late.)

Moreover, while there’s plenty of poetry, fiction, memoir, and history, there isn’t a single selection from the theater or the silver screen. An excerpt from a screenplay–say Citizen Kane–would have recognized the craft of the much maligned Hollywood author.

Readers may notice that a favorite writer or work of literature is absent from this anthology. To include every worthy writer and work would take volumes. Indeed, picking and choosing from so many outstanding authors isn’t easy. On the whole, the editors of The Literature of California have chosen wisely, fairly, and with an appreciation for both literary creativity and historical significance.

The book is divided sensibly into four sections that are organized chronologically. The first section, “Indian Beginnings,” includes creation myths and initiation chants from a dozen different tribes. The second section, “One Hundred Years of Exploration and Conquest, 1769-1870,” offers writings by European and American empire-builders as well as humble settlers. The third, “The Rise of a California Literature, 1865-1914,” provides space to internationally renowned figures like Mark Twain and Jack London, as well as to lesser-known authors like Mary Hallock Foote and Edith Maud Eaton. The fourth and final section, “Dreams and Awakenings, 1915-1945,” includes writings by Robinson Jeffers, John Steinbeck, Upton Sinclair, and William Saroyan, all of whom helped make California a compelling metaphor for America itself.

THERE IS a lively introduction to the whole book, as well as spirited introductions to the four separate sections and to the work of each author. Both clear and concise, these mini-literary essays are also inspiring.

I’ve usually turned to T. S. Eliot and Ezra Pound, Jeffers’ expatriate contemporaries, but after reading lines like, “I’d sooner, except the penalties, kill a man than a hawk” and “We have geared the machines . . . we have built the great cities; now there is no escape,” I’m more likely than ever before to turn to Jeffers’ high personal, yet apocalyptic verse.

Of course, like most anthologies, this one has old favorites: Mark Twain’s famed short story “The Celebrated Jumping Frog of Calaveras County”; a spectacular selection from Robert Louis Stevenson’s The Silverado Squatters; and William Saroyan’s “The Daring Young Man on the Flying Trapeze,” which has often been required reading for high school students, perhaps because, as the editors point out, Saroyan was “the prime optimist.”

But read “The Daring Young Man on the Flying Trapeze” again, or read it for the first time, and you may be surprised by how contemporary it feels, how acrobatic the language, and how the story manages to mix sadness and joy, the dream and the nightmare. Saroyan was an existentialist author before the existentialists, a Beat novelist before the Beats, and perhaps he ought to share credit with Jeffers as one of the founding fathers of both California and American fiction.

The editors don’t only play it safe and stick with widely recognizable authors and nationally acclaimed works of literature like The Grapes of Wrath, The Day of the Locust, and The Big Sleep.

My greatest joy derived not from rereading old favorites, but from discovering writers I had never read before, especially Toshio Mori, a Japanese-American who was born in Oakland in 1910, and whose literary career was interrupted in 1943 when he was arrested, sent to an internment camp in Utah, and had his book Yokohama, California withdrawn from publication until World War II was over. Three of Mori’s stunning short stories are included here–“The Woman Who Makes Swell Doughnuts,” “The Eggs of the World,” and “He Who Has the Laughing Face.”

I wish there were more. They are as fragile and as durable as eggs, as common as doughnuts, and yet as strange and haunting as any short story by Kafka or Gogol.

There are gems throughout this volume, and there are playful stories, essays, and poems, as well as socially responsible works about race, class, and gender. M.F.K. Fisher’s “The First Oyster,” which appears near the end of the book, is funny and delightful. It’s puzzling that a prose stylist of her genius has rarely appeared on college reading lists, but perhaps this anthology will help change that.

ONE WONDERS what New York reviewers and critics will have to say about The Literature of California–if indeed they say anything about it at all. The East Coast literary establishment has often ignored California literature and rebuked and scolded California writers as rude and unlettered, crude and unartistic.

Still, it doesn’t really matter what New York says or what New York thinks, and our writers ought to stop looking over their shoulders at New York. California doesn’t have to prove itself to anybody anymore, and The Literature of California doesn’t have to take off its hat to any other anthology of American, French, or Russian literature. Ours is as rich, as deep, as heartfelt, and as soulful as any literature in the world.

Jonah Raskin is an SSU communications professor and the author of ‘For the Hell of It: The Life and Times of Abbie Hoffman.’