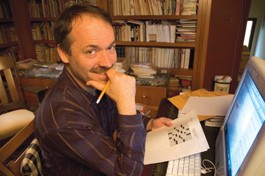 As Patrick Creadon’s new documentary Wordplay proves, there’s nothing better than sitting down with the New York Times crossword puzzle and a cup of coffee.

As dedicated crossworders know, we all have Will Shortz to thank for that daily bit of brainteasing. The crossword puzzle editor for the New York Times since 1993, Shortz has been a puzzle fanatic almost since birth. He created his first word puzzle as a child and sold his first one at 14. In college he crafted his own major–“enigmatology,” the study of puzzles.

While there is much to learn about Shortz and his weirdly wired brain in Wordplay, the film primarily comprises profiles of other crossword devotees, including The Daily Show‘s Jon Stewart, former president Bill Clinton and New York Yankees pitcher Mike Mussina, all of whom are shown hunkered over a puzzle for a good old-fashioned workout of the mind.

From the other side of the page, watching a career puzzle constructor building one up from idea to reality is strangely fascinating, almost like watching a nuclear scientist design and build a missile. Wordplay then shows the various celebs puzzling over the same crossword through clever cross-editing; who wouldn’t get a kick out of seeing Bill Clinton and Jon Stewart working out the same clue in their own unique ways?

Even crossword puzzles themselves are charming little pieces of academia. On the eve of the 1996 presidential election, for example, the New York Times ran a puzzle where the main clue was “Tomorrow’s Headline.” The second part of the phrase was “elected,” with seven blanks before it; either “Clinton” or “BobDole” could fit in that slot. But the puzzle constructor didn’t stop the madness there. All the down clues for the corresponding spots worked with either answer.

As Wordplay shows, it is this kind of loving attention to the craft, however insignificant it may seem to some, that makes these puzzle people so interesting. But as the film moves toward its dramatic arc, we learn that not all crossword puzzles are done in the solitary comfort of one’s breakfast nook.

Shortz started a national crossword puzzle tournament in 1978, and it’s been going strong ever since. Wordplay develops a dramatic plotline by showcasing the 2005 tournament, spotlighting a few top players in their daily lives and their often almost relentless quest to be named the best puzzler in America. The champion-level tournament players are true fanatics: they regularly finish entire puzzles in two to three minutes.

The competitive element of the tournament initially seems a tad overblown in the beginning of the film, but by the time the final three players are selected and placed in the high-stakes final puzzle match, the stakes feel as high to the viewer as they surely do to the contestants. This refreshing documentary shows that even in the height of summer, you don’t need street racing, supermen or sea monsters and pirates to entertain.