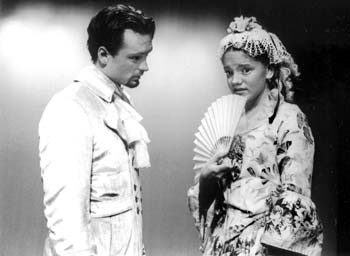 IS THE THIRD TIME the charm, or are three a crowd? The question lingers after the end of The Guilty Mother, the final installment of the Cinnabar Theater’s Figaro Fest–a two-year exploration of three Figaro plays of 18th-century French playwright Pierre Augustin Caron de Beaumarchais.

Directed by Robert Currier, The Guilty Mother continues the saga begun in The Barber of Seville, in which the rapscallion hairdresser Figaro aids his employer, Count Almaviva, in wooing the comely Rosine. In the Marriage of Figaro, the title character saves Rosine’s handmaiden Suzanne, his bride-to-be, from Almaviva’s lecherous invocation of “seignorial rights.”

The Guilty Mother finds the same cast relocated to France some 20 years thence and in the company of the dubious Major Honore Begearss, who underhandedly sets about trying to acquire Almaviva’s fortunes as well as his beautiful young ward Florestine. The facts that the ward is secretly Almaviva’s illegitimate daughter and that his son Leon is actually the progeny of Rosine and a randy page also serve as fodder for Begearss’ nimble-witted malfeasance.

Kudos go to Cinnabar’s Quicksilver II theater company for being the first to bring Beaumarchais’ final Figaro vehicle to the American stage. However, it seems there are actually two plays in this production–the wan and ponderous one that opens the evening, and the spry, light-on-its feet show that begins after intermission.

Though mercifully trimmed by Currier, the 200-year-old play has forgotten whether it’s a light-hearted comedy or a heavy-handed drama. The first act suffers from the wooden exposition of a convoluted plot and the fact that the melodrama is, well, mellow.

The second act–which is rife with comic asides and often campy delivery on the part of players–works wonderfully, and the audience’s response takes a dramatic turn for the better. It’s as if the ticket-holders are dying to boo and hiss the villains and cheer the heroes in a manner appropriate to an old school vaudeville show.

Mother gives them what they want. Lucas McClure’s Begearss, described by Figaro as “a complete army of demons stuffed within a single shirt,” dons such mock-sinister trappings as a facetious little smile and haughty guffaws from the wings. He was merrily booed by the audience during his curtain call–an excellent indicator of his character’s success.

Though Figaro is relegated to the background for much of this play, actor Sean Casey brings him to life in a decidedly blustery performance complemented by Laura Jorgensen’s portrayal of Suzanne, his saucy wife.

Though The Guilty Mother is not Beaumarchais’ greatest play, this premiere American performance marks a triumph for the Cinnabar’s efforts to revive the obscure. With this production’s nurturing, The Guilty Mother will undoubtedly re-enter the world an improved work.