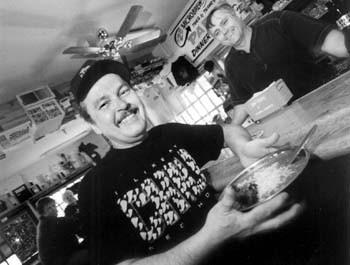 Chili has hit the big time

JANE AND MICHAEL Stern have what some might consider a dream job: they tool around the country, stop at any eating establishment that catches their fancy, and chow down hard. In the 25 years since the Sterns started trekking around the country, first following the truckers and then just following the food, they’ve had barbecues and pies and crab boils and church potluck dinners up and down both coasts and all points in between.

But when the food-writing duo sat down to write a single-subject cookbook, one dish leapt to mind: chili. “We could not think of another dish that we had eaten everywhere in America,” said Jane Stern in a recent phone interview from the Sterns’ home in Connecticut.

The result of their thorough research is Chili Nation (Broadway/ Random; $12), an easy-to-digest collection of recipes acquired in, or directly inspired by, all 50 states of the union.

In Chili Nation, the Sterns bring the food of the masses to the rest of the masses, combining a definite gourmet sensibility (which has landed them ongoing columns in Gourmet magazine and the online powerhouse Epicurious) with an entrenched predilection for stick-to-the-ribs chow. Jane describes chili in terms that any working person can appreciate: it’s simple, cheap, and gets even better on the second day. Her discriminating palate becomes obvious only when she starts talking about the flavor: “As you eat it, you get all of these different tastes in your mouth. It’s how a professional perfume nose will say a perfume has a top note, a middle ground, and a bass note,” says Jane passionately. “You don’t smell it all at once–you have to let it sit on you.

The rich flavor of a well-made chili comes from a sometimes complex mixtures of chilies and spices. These flavors vary enormously from region to region, and even from town to town, as chili has come to rest comfortably in diverse locations throughout the country–including Petaluma and Healdsburg, which both host popular chili cook-offs–each with its own particular flavors and attitude to offer.

Texan chilies tend toward the four-alarm, and the state raises the ceiling of heat with its infamous chili cook-offs. “Without a doubt, Texans are the most berserk about chili,” says Jane, “followed by New Mexico,” Texas’s neighbor, which prides itself on the sheer variety of hot peppers that it produces, and actually boasts the chili as its state vegetable.

Even Ohio has the mind-boggling “Cincinnati five-way,” with a spicy-sweet meat sauce, flavored with layers of cardamom, cinnamon, allspice, turmeric, and even, amazingly, some chili powder. The Sterns got their recipe by sending a dollar to a P.O. box from the back of a women’s magazine, but the medley of seemingly anomalous spices marks it as true to the spirit of Cincinnati chili.

But what about the states that haven’t bought into the chili mystique? Well, in those cases Jane and Michael got creative and developed recipes based on the culinary ambiance: that is, they looked to native ingredients or food combinations for inspiration. Idaho’s chili is thick with potatoes; Hawaii’s chili has macadamia nuts and pork. In a particularly telling interpretation for their home state of Connecticut, the Sterns offer a chili called “Herb Garden Springtime Chili.”

It has chicken in it. And chives. And a pinch of green jalapeño powder. And one small can of mild green chilies, the kind that steel-belted Texans would probably decorate cakes with. In other words, the Connecticut chili in Chili Nation is a pretty mellow dish, which has riled up a few of the Sterns’ fellow “Nutmeggers.” “I guess I think we’re a state of wussy wimps. What can I say?” Jane says with an unrepentant giggle. “Well, it’s not that we’re wussy wimps, but that Connecticut has more herb farms than any state in the country. … Jesus, every other thing in the state is an herb farm. So I thought we really had to do something based on herbs.”

About 150 recipes were tested to find the 50 finalists for Chili Nation, and the Sterns had to test ’em all. Often problems emerged less in the testing than in the actual notation of the recipe in the first place. The oral tradition of cooking is alive and well in the American heartland, with cooks passing on to their kids recipes that usually involve handfuls of this and pinches of that. Which is great from an anthropological and culinary point of view, but is hell on cookbook writers.

“In the kind of restaurants that we’re interested in, there often is no recipe. Somebody has just been making the thing out of their heads for 30 years,” says Jane.

SHE RECALLS standing by a stove in the back of a Topeka, Kansas, grocery store watching the Porubsky brothers make their family’s locally famous brew, and taking notes. “They had no idea,” Jane says. “If we had said, write this down, they couldn’t. Because they’re not even conscious of what they’re putting in at this point.”

This is the work that the Sterns do: recording culinary Americana, the dietary dialects of the United States. Jane and Michael are pop food anthropologists, and Chili Nation captures them at their adventuresome best, chasing the endless variations of chili that twist and bend across the country like the back roads on a badly folded, barely readable road map.

Until recently this culinary map of America has been shoved in the glove box of our collective consciousness. We knew the food was there, we ate it when we went to visit our parents, or on our college road trips, but we didn’t really talk about it. Jane remembers when she and Michael started doing their road research in the early ’70s: “It was at the height of what Michael always called America’s culinary inferiority complex,” she says. “If food wasn’t French or ‘continental,’ it was kind of an embarrassment. … You would never serve American food to any sophisticated person, because people thought it was just garbage.”

In the early ’90s, the Sterns wrote about chili for The New Yorker, which, by some standards, means that it’s “arrived.” But really, it’s never left. The food has stayed the same; only the attitude toward it has changed. As Michael says, “People used to be embarrassed by their local food. Now they’re proud of it.

“And they should be.”