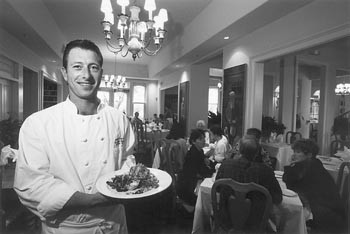 The General’s Daughter gets our attention

ADMIT IT: This is the time of year when “gift” becomes a four-letter word, and any tolerance for holiday hordes (and, God knows, Sonoma County draws its share) begins an insidious journey toward the breaking point. One remedy is to pry frantic holiday visitors (and yourself) out of the stores and away from the QVC shopping channel for a couple of hours of good food and conversation in a graceful setting.

A few blocks from the tourist-driven bustle of Sonoma Plaza rises a stately yellow Victorian mansion, set on one and a half acres of landscaped gardens, complete with patios, porches, and century-old climbing roses. The General’s Daughter, built in 1864 by General Vallejo Mariano for his daughter Natalia (their likenesses now adorn the restroom doors), is a restaurant that celebrates the convergence of old and new Sonoma–with a generous portion of France’s rustic Provence thrown in.

Completely refurbished in 1993, the old building has blossomed in its second incarnation as an upscale eatery. Indeed, next June, the restaurant will open Ramekins, a Mediterranean-style adobe building on the premises, that will house a non-professional cooking school, a five-room bed-and-breakfast hostelry, and a special-events facility.

The General’s Daughter’s gracious dining room, which consists of several beautifully appointed parlors, has a feeling of elegance, but not ostentation. The irregularly placed tables are well spaced to give a sense of intimacy–not so uniformly close that you unwittingly eavesdrop on (and sometimes even bond with) other diners.

WE BEGAN with homemade infused vodkas, the restaurant’s popular, potent icebreakers. There is a rotating selection, all made with Bay Area Skyy vodka. This night’s choices included a winter spice cinnamon-clove and a grapefruit–but we opted for a vanilla bean and a Thai pepper-ginger (both $4). Served straight up in frosty martini glasses, the vanilla bean was as smooth and creamy-tasting as a clear, distilled milkshake, and the Thai pepper-ginger was an icy concoction with a blast of tongue-curling heat that had good Bloody Mary potential.

The restaurant was fairly quiet on this midweek evening, but felt understaffed. Our server was harried and distracted and seemed keen to rush us out at the end of the meal while we would have liked to linger. (On another recent visit, service was more accommodating, but still strangely unfocused for such a classy establishment.)

The extensive wine list includes more than 100 wines, the majority hailing from Sonoma County. Fifteen wines are available by the glass, several by the half-bottle. We selected a Roche 1994 Carneros unfiltered pinot noir ($28). This was a gutsy, deep ruby pinot with a concentrated strawberry bouquet.

To start, we ordered crisp buttermilk-and-cornmeal onion rings with lemon-pepper aioli ($3.95). A mountain of shoestring-style onions was heaped clumsily onto a plate–a dinerlike presentation that countered the genteel ambiance. The only evidence of the promised aioli were some oily patches seeping through the middle of the onion pile. We could not detect any lemon-pepper flavor, but the onions, though too greasy, were hot and tasty.

The Sonoma mixed green salad was a fresh and pleasing assortment of greens, dressed with balsamic vinaigrette, plus roasted garlic, sun-dried tomatoes, and toasted hazelnuts ($6.95), punctuated by pungent crumbles of Laura Chenel’s chèvre.

Next, we tried the wild mushroom risotto with white truffle oil ($14.95), a triumphant blend of perfectly plump grains of arborio rice studded with three types of mushrooms and mixed with caramelized onions, baby spinach, and pecorino-romano cheese. The whole thing was drizzled with white truffle oil and garnished with a jaunty fresh rosemary sprig. The tones of truffles and mushrooms imparted a wonderful earthy, nutty flavor that well matched the unfiltered wine, while the tender baby spinach gave the dish a clean symmetry. A basket of warm whole-wheat rolls, fresh from the kitchen, enhanced the experience.

The grilled Pacific salmon with a ginger and black pepper beurre blanc ($16.95) was a bright, Asian-inspired composition. The deftly cooked salmon was crisp-topped and moist beneath. Rosy-hued pickled ginger and snippets of scallions heightened the flavor. The dish was served with prawn-fried rice (although we couldn’t locate any prawns) and slightly overcooked grilled baby bok choy.

The white chocolate mousse topped with passion fruit purée and tropical fruit ($4.95) came served in a martini glass, garnished with blackberries, melon, and kiwi. We expected a light consistency, but it was ultra-dense, and the topping tasted more of orange than passion fruit.

Citrus-scented and served warm, the orange bread pudding ($4.95), on the other hand, looked heavy but had a surprisingly airy texture with a good orange flavor and was popping with tiny delicate currants. A fitting finale.

The General’s Daughter is an enjoyable and elegant place to entertain guests (or give yourself a well-earned breather) during these trying seasonal times.

‘The View from Spring to Autumn’