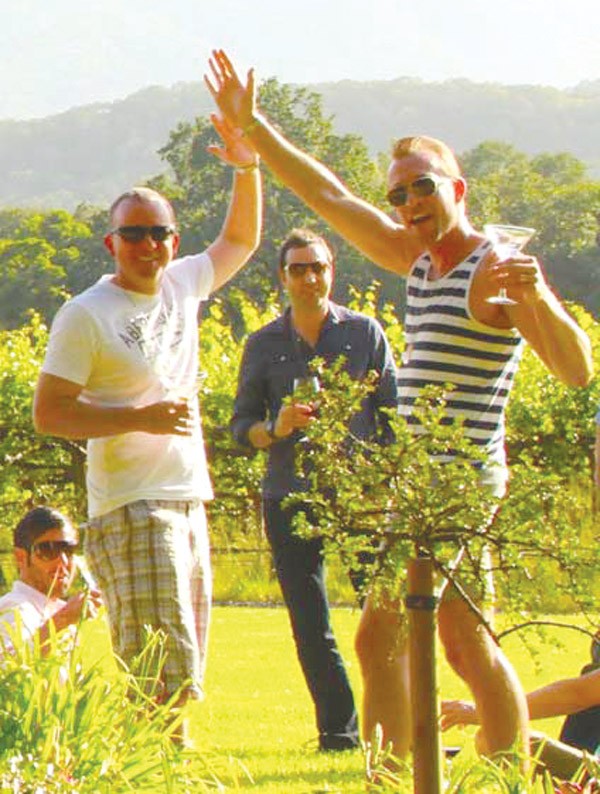 On any given weekend, dozens of wineries festoon their driveways with gaily colored balloons, hoping to attract curious travelers. So where, pray tell, are the rainbow flags? When native son Mark Vogler returned to manage online business for a wine company, he began to ask that question. Unwittingly, he had become the point man for a far-flung network of would-be gay wine tourists. “I would get calls almost daily, from L.A., from New York, from friends of friends: Where can we go where we’ll feel comfortable? Where can I bring a date?” he says. “I realized almost no one was targeting the gay market. Beer and spirits were there years ago. Wine—we’re not even on their radar.”

He started talking with Gary Saperstein, former hospitality manager at the Girl & the Fig. At first, he laughed off the idea, but eventually cofounded Out in the Vineyard with Vogler. They found a ready accomplice in Julie Atwood, who offered to host events at high-priced Atwood Ranch. “But why are you doing this?” they asked. “I’ll be blunt,” Vogler recalls her saying. “We’re a wedding destination, gays are getting married, and I want to be in on it. And I spent 20 years in New York as a designer—I miss my gays!”

Next, the two approached Napa Valley Wine Train, which loved the idea. Afterward, the staff said it was the most fun they’d had. Greg Bjornstad has been on board since last year’s event. In his role as an international winemaking consultant, Bjornstad says his personal life is a non-issue—although it was a first when he put “gay” and “Bjornstad Cellars” together in the same place.

At the sales and marketing end, the atmosphere is as accommodating as the entertainment industry. “It’s been my anecdotal experience that the gay winemaker is allowed to be a little bit more expressive,” says Bjornstad, who himself has a quiet, down-to-earth demeanor. Out in the vineyards, “that’s where there are some people who are not as accommodating.” Tensions between growers and wineries can already run high during harvest, but Bjornstad recalls only one experience that involved unpleasant language. “It didn’t help.”

“The perception of the gay lifestyle is all bars and circuit parties,” says Vogler. “And that’s not the whole picture.” This year’s three-hour tour features a sparkling wine reception, winemaker talks and a five-course menu paired with a rainbow of varietals from winemakers gay, lesbian—and straight.