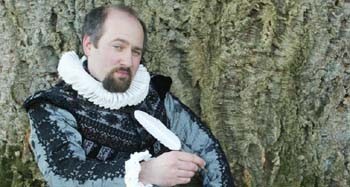 ‘The Beard of Avon’

Trippingly on the Tongue: Richard La Rosa plays that old faker Will in ‘The Beard of Avon.’

“I have great, thoughtlike things within my head,” pronounces a barely literate, desperately unhappy farmer named William Shakspere (sic) in the opening scene of Amy Freed’s 2001 play, The Beard of Avon. Shakspere is not alone in his highly combustible artistic aspirations. Freed, too, has great thoughtlike things in her head, and she has spilled a vast number of them into her exuberantly overstuffed play: historical revisionism, literary debate, sexual farce, puns, alliterations, iambic pentameter–you name it, it’s here.

Shakspere (Richard La Rosa) in Santa Rosa Junior College’s ambitious current production of Beard, is discontented with his country life. Forced to marry the much older Anne Hathaway (Danica Siegel) after ineptly knocking her up, the accidental family man has vague dreams of greatness, spends his time inventing spontaneous rhymes and grouses endlessly about his encroaching baldness and various hair-restoring remedies such as smearing dung on his pate. “Everyone called me shithead,” he moans. (It’s that kind of play.)

Soon thereafter, Will meets a band of traveling players and, smitten with the promise of stardom on the stage, follows them to London, where he joins the troop as a bit-part spear shaker (get it?). He is eventually introduced to Edward de Vere, the Earl of Oxford (the mesmerizing Cameron Stuckey), a flamboyantly open bisexual but closeted playwright with a stack of unproduced scripts who fears that he’d lose his standing in royal society should his name ever be attached to anything so low as the theater.

In short order, Shakspere is persuaded to change his name to the much classier “Shakespeare” and lend it to de Vere’s latest work, a little thing called Titus Andronicus. That gruesome tragedy–hilariously staged with lopped-off hands and a riotously severed tongue–becomes a popular hit, and while Shakespeare’s renown as a writer begins to grow, de Vere, the first in a whole string of stagestruck, script-toting royals, forces poor Will to become a professional “beard,” signing his name to everything from Romeo and Juliet to Taming of the Shrew (you’ll never guess who actually wrote that one).

Of course, with all those thoughtlike things still rambling about in his head, and with that latent skill for extemporized rhyme and poetic imagery, the newborn Shakespeare can’t resist tinkering a bit with the manuscripts he’s given, and eventually and ironically becomes the world’s first script doctor, fixing up the flaws in other people’s plays, which he then must pass off as his own while the increasingly sloppy royals take pleasure in knowing that certain insiders think each new play is Shakespeare’s in name only. My favorite line comes when Shakespeare complains that in a collaboration with de Vere on Richard III, the earl said simply, “I see . . . a hunchback. Fill it in.”

Into all of this lit-crit tomfoolery, Freed throws numerous subplots and tangential bits of business (some may feel there are too many of these), with a constant parade of cross-dressers and sonnet-reciting lords and ladies.

Santa Rosa Junior College’s energetic production (a bargain at 10 bucks a ticket) represents the first time performance rights for Beard have been granted to a college drama department. The cast is game for the challenge, with Stuckey’s de Vere the obvious standout and with spirited, gutsy performances by La Rosa as Will and Noah Luce as de Vere’s devoted lover Henry Wrothesly, but many of the supporting cast members seemed to be struggling with the Elizabethan speech (all those words and syllables), many of which were hard to make out on opening night.

One could say that, as in many of Shakespeare’s plays (assuming they were indeed Shakespeare’s plays), The Beard of Avon contains more tangents than are really necessary, though perhaps that’s Freed’s objective, to mirror the Bard’s everything-and-the-kitchen-sink approach. Put simply, some will like it; some won’t. I liked it.