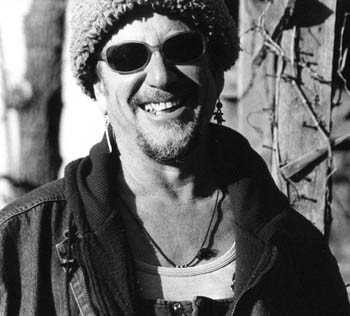 The many moods of folkie Greg Brown

He’s the last American troubadour, a complex mix of Midwestern common sense and bohemian Zen appeal inhabiting a poet’s soul. In some ways, there are two Greg Browns: tender and tough, acoustic and electric, funny and sorrowful, cynical and filled with an unquenchable thirst for life. One careens down country roads in the dead of night in a broken-down farm truck, no headlights, a bottle of Wild Turkey wedged between his thighs and pioneering country star Jimmie Rodgers blaring on the stereo. The other is a sunny child balanced on his grandmother’s knee, sampling her canned goods and drinking in the cool summer breeze.

“I know that I look at life and I see a lot of different colors, a lot of different moods,” says the singer and songwriter during a phone interview from Portland, Maine. “I do see a lot of causes for hope and I do see a lot of causes for despair. I see things that make me proud to be a human being on this planet, and I see so many other things that make me just appalled. All of that gets into my songs. On a particular Friday, I might feel quite hopeful, and by Tuesday I might be feeling that we’re completely screwed. I manage to find balance there between the two.

“But I can attest to being one person,” he adds with a laugh.

Brown returns to the North Bay on May 1, along with his singer-songwriter daughter Pieta and his longtime accompanist Bo Ramsey (whose stinging slide-guitar work can be heard on Lucinda Williams 1998 breakthrough album Car Wheels on a Gravel Road).

The son of Pentecostal preacher and electric-guitarist mother, Brown is an old-time folkie blessed with a gravelly baritone, a reflective nature and an acerbic wit. He grew up in rural Iowa, listening to gospel music and sampling those canned goods that are the subject of one his best-known songs. At 18 he headed to New York City, playing at Gerdes Folk City and becoming immersed in the swirl of cultural influences found in that metropolis.

“When I went to New York as a kid, the music itself did not make much of an impression,” Brown recalls. “But being in there at that age, I’d find myself walking through a Chinese street fair one moment, and on the next street would be a Bulgarian marching band. It was like taking a trip around the world, politically and culturally and in every other kind of way. Being a boy from the sticks, it was a real eye opener.”

Yet Brown returned to the Midwest. He landed a job with the Iowa Arts Council and played concerts for kids, mental patients and rest-home residents. He played the local cafes, and in the mid-’80s became a regular on Garrison Keillor’s homespun public-radio show Prairie Home Companion.

Brown also started his own record label, Red House, and in 1983 released Iowa Waltz, the first in a long string of acclaimed albums that ranged from 1986’s Songs of Innocence and Experience (with lyrics culled from the works of transcendental poet William Blake and featuring fiddler Michael Doucet) to 1993’s Bathtub Blues (with songs co-written with elementary school children) to 2000’s compelling Covenant, a collection of songs about love’s promises, both broken and kept.

Along the way he got married, got divorced, raised three daughters and recorded a boozy version of Bob Dylan’s “Pledging My Time” that alone could have made his career as a song interpreter.

His most recent album, Honey in the Lion’s Head, finds the 54-year-old Brown returning to the traditional folk songs of his youth. The album is something of a family affair: Brown’s new wife, Iris DeMent, contributes vocals, as do his daughters Pieta and Constie. A third daughter, Zoe, designed the cover art. In some instances, as with “Old Smokey,” Brown deftly reclaims old-time love songs that long ago lapsed in the realm of children’s music.

“A lot these songs are just so hearty and they’ve been around so long that they become joke songs or kids’ songs,” he says. “But I had a feeling that there would be some people who hadn’t heard some of the beautiful verses you don’t usually get to hear to some of those songs, and that’s one reason I included those.”

Some critics have dismissed this recording as a detour from the poetic originals for which he is so well-known, but Brown insists there is merit in these chestnuts.

“Good songs are kind of like films,” he concludes. “A lot of my favorites–traditional folk songs, old Dylan songs, Mark Knopfler songs–have a very visual quality; they’re so cinematic that you find yourself in a landscape. There’s a sense of roominess to a lot of these songs that I really like.”